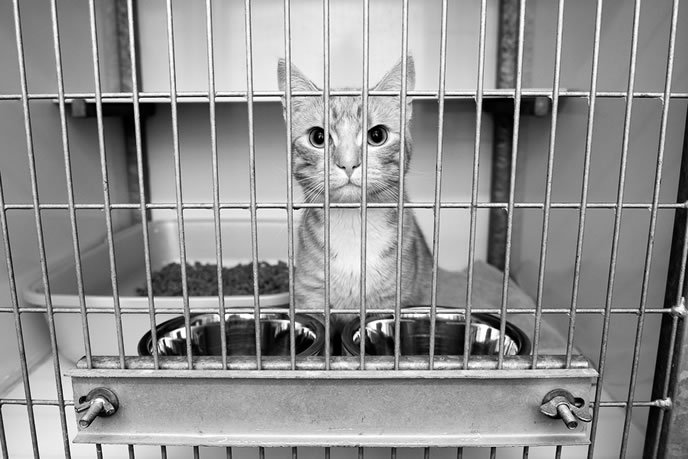 Despite the potential consequences of obesity, up to 59 percent of cats are overweight, according to the American Animal Hospital Association. It lists some of the effects in “Weight Management Guidelines for Dogs and Cats,” published in the Journal of the AAHA: chronic inflammation caused by fat tissue releasing hormones and proteins called cytokines, skin and respiratory disorders, renal dysfunction, diabetes and orthopedic disease.

The association acknowledges that weight management is a challenge, made more difficult because it must be individualized and lifelong. The guidelines offer practical advice, such as solutions for cats’ night-time vocalizing for food: Set automatic feeders for night. Provide toys with hidden food.

Aging is a significant factor in obesity, affecting metabolism and activity level, the guidelines say, adding that adult cats “may benefit from increased vigilance and perhaps a diet change to a less calorie-dense food.”

Tail Vaccinations Can Save Lives, a Study Says

Vaccinations administered at the tip of cats’ tails seem to be as effective as those given at traditional sites, according to a University of Florida study. What’s more, researchers say, it can save lives.

More owners would be encouraged to treat cats’ injection-site sarcomas when they occur because surgical intervention would be easier and less invasive, researchers say.

Veterinarians usually vaccinate cats below the elbow or knee joint in the leg. If cancer develops in those areas, it can force owners into making difficult decisions about subjecting their pet to surgery or amputation of a limb, says researcher Julie Levy, DVM, Ph.D., Maddie’s Professor of Shelter Medicine at the UF College of Veterinary Medicine.

“Many owners elect not to pursue the most effective treatment — radical surgical excision of the tumor — because excision of tumors in the limbs and torso is often disfiguring, painful and expensive,” Dr. Levy says.

No definitive cause for this relatively rare cancer, which affects between 1 and 10 cats of every 10,000 cats vaccinated, has been identified.

UF researchers surveyed oncologists about preferred injection sites, considering the surgical treatment of sarcomas. The tail was a favored site, and the team studied 60 cats in a UF trap-neuter-return program. Results show that the cats accepted tail vaccinations, and they effectively provided immunity.

Dr. Levy and national experts in infectious disease and vaccinology collaborated on the study, published in the Journal of Feline Medicine and Surgery. Among them was Edward Dubovi, Ph.D., Director of the Virology Laboratory at Cornell’s Animal Health Diagnostic Center, who tested serum samples collected for feline parvovirus antibodies.

Cheryl Balkman, DVM, ACVIM, Chief of Oncology at Cornell, says tail vaccinations are a great idea that owners should discuss with their cat’s veterinarian. “The key is to vaccinate toward the tip of the tail and not the base where it meets the body because, if a cancer develops near the tip, the cancer can be completely removed with surgery. If a cancer develops at the base of the tail close to the body, complete removal may not be possible.”

The Power of Touch

The benefits of gentling — the use of stroking and vocalization — have been documented in several species, but studies on cats have emerged only recently. The latest is from the University of Queensland, Australia, funded by the Morris Animal Foundation and published by Elsevier.

“Emotional stress can compromise the health of cats in shelters, leading to immune suppression and upper respiratory infections (URIs),” the foundation says, adding that URI is a common cause for euthanasia in shelter cats.

Queensland researchers identified 139 cats as anxious when admitted to a shelter and divided them into a control group and a group to receive gentling. The second group was stroked on the head and neck for 10 minutes four times a day for 10 days. The results: Gentled cats were less likely to be anxious. They also had increased levels of secretory immunoglobulin A (S-IgA), which plays a vital role in immunity. In other species, emotional stress has been shown to inhibit S-IgA production.

Cats in the control group were more than two times more likely to develop URI, while gentled cats had lower rates. A number of hostile and aggressive cats responded so well to gentling that they were adopted in less than a week.