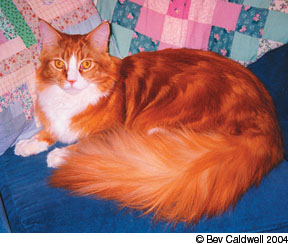 What good is your dear cats tail? What purpose does it serve other than as a fetchingly sinuous, aesthetically pleasing adornment to her lovely body? Well, if she could speak English (or Persian or Siamese, for that matter), she might tell you that her tail has many useful functions.

A Few Possibilities
The cat might, for example, say that she uses her tail to help maintain her balance as she negotiates her way stealthily along a narrow ledge or tree branch. She might explain that she uses her tail as a means of conveying her mood – batting it back and forth if shes annoyed or angry, for instance, or holding it straight up in the air when shes feeling comfortable and happy. Or maybe shed confide to you – not for publication, of course – that she uses her tail as a secret weapon in hunting, switching it seductively to alarm and flush out her hidden prey.

According to James Flanders, DVM, an associate professor of clinical sciences at Cornell Universitys College of Veterinary Medicine, it is indeed plausible – if not scientifically verifiable – that a cats tail serves such purposes, although he doubts its value as a balancing aid since, he points out, cats without tails do a perfectly good job of remaining steady on their feet.

A Vulnerable Appendage
There comes a time in many a cats life, however, when the tail must be wholly or partially amputated as the result of traumatic injury. And in most cases, says Dr. Flanders, a cat that has had to part with its tail will do just fine without it.

Compared to other portions of the feline anatomy, the tail is a simple structure. It is essentially an extension of the backbone, Dr. Flanders notes, with small bones in it, similar to those in the spine, that go all the way out to the tip.

Although vitally important spinal nerves, sheltered within the spinal canal, terminate well before they reach the point on a cats upper rear end at which the tail begins (the tail head), some nerves extend to the end of the appendage. Depending on their proximity to the tail head, these long, threadlike nerves govern sensations to the tail and affect an animals control of its bladder and anus. Because they are not protectively housed within the spinal canal, these nerves are prone to injury, the most serious consequence of which is potential compromise or total loss of excretory control.

Sources of Trauma
A cats tail might be injured in a variety of ways. An owner might slam a door on it. A cat might hide beneath the hood of a car and have its tail caught in a belt when the engine starts. Rarely will a cats tail be severely injured in a fall or during a fight with another animal.

What we see most often, says Dr. Flanders, is a tail thats gotten caught beneath the tires of a moving car. As a tire spins, it yanks the tail violently. When we see the animal, the tail is likely to be limp and excoriated. Then we have to make a judgment: Does the tail stand a chance of functioning again, or will it be permanently useless?

If the tail is merely battered – with superficial scrapes and lacerations – the injuries can be treated as a local problem, Dr. Flanders says, and the cat will probably respond very well. But if the trauma is more severe, he adds, and involves a large part of the tail or if there have been a lot of fractures, we start thinking about amputation. And if the cats tail is completely limp and there are large areas of dead tissue, amputation is the only treatment option.

Surgical Options
In some cases, the amputation may not have to be total. If only the rear part of the tail is seriously injured, says Dr. Flanders, we can remove that part, and the cat will get along well with what remains. But if the tail has been ripped up at the roots, is hanging there by the skin, is cold to the touch, and the cat is just dragging it around, that definitely requires complete amputation.

For an experienced veterinary surgeon, the amputation procedure is relatively simple, since, as Dr. Flanders explains, There isnt much to the tail other than the bone, nerves, blood vessels, some small muscles and skin. We try not to cut into bone tissue – we cut between the bones, removing just the part of the tail that must be amputated, and then we close the skin over the incision.

If the procedure involves just the tip of the tail, its a minor procedure that takes only a few minutes. If we have to take it off right at its base, says Dr. Flanders, that would be full-on surgery in an operating room and might take 45 minutes or more. Amputation involving only a small portion of the tail would typically cost the owner about $100, he says, while a total amputation could cost $1,000 or so.

The Recovery Period
Recovery from either a partial or total tail amputation, he notes, is pretty quick. Says Dr. Flanders: The animal will usually feel good by the next day, running around and jumping, as usual.

In some cases, well put an Elizabethan collar on the animal so that it cant chew at the sutures. And if weve done a partial amputation, we may want the remaining part of the tail to be bandaged for a few days so that the cat doesnt bang the incision.