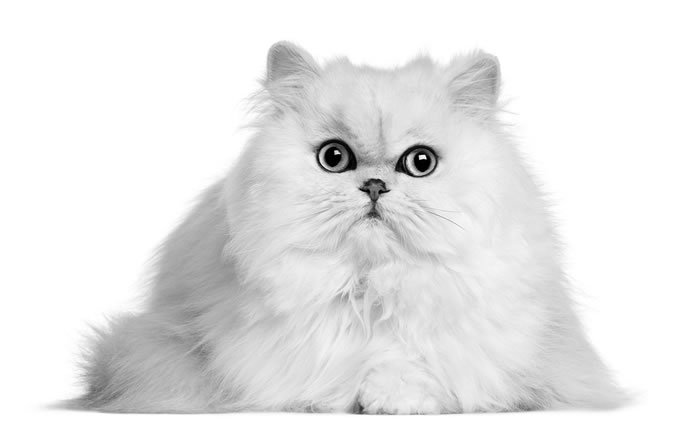 Other than the unlikely use of goggles, one of the best ways to protect your cats vision is to pay attention to his behavior. If hes squinting or rubbing his eyes, he could have a corneal ulcer. The painful condition is caused by an erosion of the layers of the cornea, the translucent outer covering of the eye.

Yet another telling sign is a discharge from the eye. This can range from tearing to a thick secretion. An opaque white, yellow or blue coloration may also be noticeable. Eventually, the discoloration and a cloudiness of the cornea can prevent light from entering the eye and result in blindness.

Healthy Cornea. The cardinal signs of a corneal ulcer include discomfort, ocular discharge, redness of the white of the eye and the opacity of the cornea itself, says ophthalmologist Eric C. Ledbetter, DVM, DACVO, at Cornell University Hospital for Animals. The cornea should be clear, and with an ulcer it often becomes opaque.

Left untreated, corneal ulcers can develop serious complications that may compromise visual acuity and permanently destroy a cats sight if a veterinarian doesnt promptly treat it.

The cornea consists of the epithelium, which are the cells in the outermost layer; the stroma, which is comprised of connective tissue cells; the endothelium, a single layer of cells whose primary function is to maintain the cornea in a dehydrated state to help achieve optical clarity; and the Descemets membrane, a thin, strong tissue that protects against infection and injury.

A corneal ulcer is an erosion of the epithelium into the stroma, where fluid from tears gives the cloudy appearance to the eye. If the erosion continues to Descemets membrane, a deep ulcer called a descemetocele forms. Then the eye may leak and can collapse, Dr. Ledbetter says. At this stage, surgery and tissue grafting may be necessary. The tissue is usually harvested from the cats own eye, but synthetic and other biological graft materials are also available, he says. Some eyes can be saved with surgery.

Corneal ulceration has many causes, but feline herpesvirus virus (FHV-1) is overwhelmingly the most common, Dr. Ledbetter says. The highly contagious virus is transmitted by contact with saliva, ocular or nasal secretions, such as sneeze droplets, shared food and litter. The virus replicates within corneal cells and destroys them, requiring treatment with topical drugs or antiviral medication.

FHV-1 infection typically occurs in kittens, with an estimated 80 percent progressing to latent infection, and 45 percent of those experiencing spontaneous reactivation of the virus later in life, according to a study published in 2010 in Journal of Feline Medicine and Surgery.

Among the many other causes of corneal ulcers in cats:

– External injury resulting from fights, accidents, thorns or other sharp or abrasive objects coming into contact with the eye. These injuries can reduce the corneas anatomical and physiological defenses and result in secondary corneal infections.

– Facial nerve paralysis: This can cause a disorder in a cats blink reflex – an important function in protecting the eye. Causes can include inflammation of the middle ear or petrous temporal bone, a dense pyramid-shaped bone at the base the skull, post-surgical complications or trauma.

– External irritation: According to the Cornell Feline Health Center, other causes include ingrown eyelashes, dirt trapped beneath the eyelid or exposure to caustic or harmful chemicals such as shampoos and household cleaners.

– Bacterial infection: A variety of bacteria can infect the eye, so a culture is often needed to determine the correct antibiotic to be used.

An ulcers progress depends on a number of factors, especially how quickly a veterinarian attends to it. A corneal ulcer can heal in a week or less with medical care. Without it – or if a cats immune system is weakened – the body tries to heal the cornea by sending blood vessels into the cornea. This can cause the cornea to swell and become susceptible to invading bacteria that can erode it.

Specific breeds are more susceptible to corneal ulcers, particularly short-faced cats bred to achieve a baby-like appearance, Dr. Ledbetter says. Himalayans and Persians are kind of the poster children. Theyve been bred for a very specific facial look, which is more human-like and its at the cost of protecting their eyes.

Other flat-faced breeds are the British Shorthair, Scottish Fold, Munchkin and Selkirk Rex. Their prominent eyes put them at risk of eye trauma when they run into an object or a sharp paw in a scuffle with another cat.

Testing for Tears. In an ophthalmic exam, veterinarians will stain the eye with fluorescein, an orange substance that fluoresces under a blue light to highlight foreign bodies and damage to the cornea. They might also test for tear production, obtain cultures and perform a microscopic examination of tissue.

Compared with dogs, the cause of feline corneal ulcers is more often viral, Dr. Ledbetter says. Goal No. 1 of treatment should always be to identify and eliminate the underlying cause whenever possible.

After the cause is found and removed – or in the case of a wound, healed – the next step is to prevent secondary infections and apply a topical antibiotic or administer an antiviral medication if the cause is viral.

Antibiotic drops may be applied but are effective only for several hours. They must be applied frequently, so often longer-lasting ointments are applied. In some cases Dr. Ledbetter prescribes a drug called atropine to help control pain. A side effect is that it makes a cat light-sensitive, even for days after the medication is halted.

Atropine is known to have a bad taste, and if it gets in a cats mouth during application, drooling can occur for a period of time. An uncomfortable cat can understandably make the next application more difficult.

The Follow-ups. A patient should be re-examined after two to three days of treatment to ensure that healing is progressing. If the ulcer isnt healing well, additional treatments or surgery may
be necessary.

In addition to the cost of an Elizabethan collar as a protective measure, the fees for treating a cat with a corneal ulcer will vary from clinic to clinic, Dr. Ledbetter says. The costs are much lower when getting appropriate treatment earlier than if treating secondary complications, such as infections. Then the costs will rise substantially.

As for recovery, he says, In general, if its an uncomplicated ulcer, then the prognosis is good. With secondary causes or if the problem is repetitive, then it can be guarded or poor. The critical message should be to seek appropriate care early.