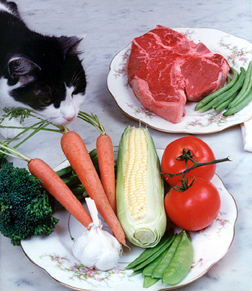 More than 30 years ago, nutritionist Robert Atkins launched his now-famous diet revolution, promising overweight Americans that they could efficiently shed their excess fat by radically reducing – if not entirely halting – their carbohydrate consumption. Obesity most frequently results not from the excessive intake of protein and fat, he contended, but rather from the consumption of starches, cellulose, and refined sugar (which he referred to as the killer carbohydrate).

Unlike protein and other dietary components, Dr. Atkins argued, carbohydrate molecules are not efficiently metabolized in the course of routine daily activity. As a result, extra sugar (glucose) produced by digestion of carbohydrates tends to be stored as fat in the bodys tissues. Consequently, his wildly popular Atkins Diet advised people to cut back on carbohydrates as a sure way to get slim and stay slim forever.

These days, many veterinary nutritionists are similarly recommending that cat owners vigilantly monitor the carbohydrate content of their animals food. By embracing what some nutritionists jokingly refer to as the catkins diet- cutting down on their fat cats carbohydrate consumption – owners will be offering their animals a number of health benefits, weight reduction being one of them.

An Obesity Epidemic
There is abundant evidence that feline obesity is definitely on the increase, says Francis Kallfelz, DVM, PhD, a professor of veterinary nutrition at Cornell Universitys College of Veterinary Medicine. Indeed, a recent study indicated that one-fourth of all household cats in the U.S. are obese. Other reports suggest that as many as 50 percent of cats are overweight to some extent – and that 40 percent can be classified as obese. An estimated 12 percent of cats are overweight by the time they are one year of age, nearly 20 percent are overweight by age two, and the problem, if ignored, will continue to increase until about age seven before the rate of weight gain begins to flatten.

Obesity is a serious disorder that can dramatically shorten a cats life, since seriously overweight animals are known to be at high risk for a number of debilitating, if not life-threatening, conditions, such as diabetes mellitus, arthritis, kidney problems, gastrointestinal disorders and certain types of liver disease.

There are several reasons why the number of obese felines is increasing. For example, says Dr. Kallfelz, the number of neutered cats is steadily on the rise, a result of a laudable effort to control the nations cat population.

Unfortunately, he notes, some people dont realize that cats are less active after being spayed, and they keep feeding them the same amount of food. The resulting imbalance between calories consumed and energy expended through exercise is bound to result in weight gain, he explains.

Excessive Carbohydrates
Energy imbalance for all cats – regardless of their reproductive status – is aggravated by the high carbohydrate content of most dry cat foods, which ranges between 30 and 40 percent. Commercial manufacturers use carbohydrates in their products – grains, starches, and so forth – as fillers because they are less expensive than protein ingredients.

But cats dont really need carbohydrates as an energy source. In fact, cats can be very well maintained on diets that are nearly carbohydrate-free – diets that supply their energy requirements almost exclusively in the form of fat and protein. With a steady diet of commercial dry food, the excess carbohydrates are stored in their bodies as animal starch (glycogen) and fat, with obesity being the primary side effect.

What is the optimal balance of protein, fat and carbohydrates? Some veterinary nutritionists allude to what any cat – a pure carnivore – would choose for itself if it could. A mouse, for example, is about 40 percent protein, 50 percent fat, and only 3 percent carbohydrate (the rest is water), and thats what the typical cat requires to maintain a healthy balance of energy in and energy out.

Calories Count Most
While some nutritionists may recommend abandoning dry cat food altogether in favor of canned wet food, others – such as Dr. Kallfelz – urge owners to pay more attention to the amount of food they habitually make available to their cats rather than to its nutritional content.

Carbohydrates are not the issue, says Dr. Kallfelz. If you have an overweight cat, you have to put it on a low-calorie, nutritionally balanced diet so that it consumes fewer calories than its expending.

Above all, he urges owners to refrain from “free-choice” feeding, which is often done for the sake of convenience. Putting out a heaping bowl of dry cat food every morning, allowing the animal to feed at will throughout the day (and replenishing when the bowl is empty) is an excellent way to produce a fat cat, Dr. Kallfelz observes.

Since cats’ dietary requirements vary according to such factors as age, reproductive status and normal level of activity, Dr. Kallfelz suggests that owners consult a veterinarian to devise the proper diet and feeding schedule. “The goal is to effect any weight loss in a healthy, gradual fashion, says Dr. Kallfelz.