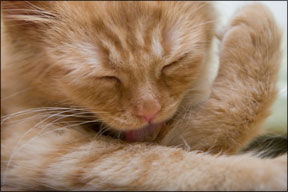 Every so often, your otherwise fastidious cat will do an alarming and somewhat disgusting thing. Shell awake from a peaceful nap, rise up on her paws, retch convulsively for a moment or two, and spit up what may appear at first glance to be a damp clump. What

Despite the term, disgorged hairballs are not usually round. They are often slender and cylindrical, shaped more like a cigar or sausage than a ball. According to Richard Goldstein, DVM, an associate professor of small animal medicine at Cornell Universitys College of Veterinary Medicine, a spit-up hairballs elongated shape is imparted by the narrow food tube (esophagus) in which it develops or through which it passes on its journey from the cats stomach to the outside world. However, he notes, a hairball that is not disgorged and remains in the stomach will indeed be round – “like a sponge or a rolled-up sock,” he says.

Regurgitated hairballs are variable in size; though usually about an inch long, they can be as long as five inches and an inch thick. The color is mainly that of the cats coat, darkened by the color of the animals food and various gastric secretions, such as green bile. The ejected matter will typically have an unpleasant but tolerable odor.

Hazardous Potential. Hairballs are the unsavory by-product of a normal habit. As your cat grooms herself, she swallows a lot of loose hair. This happens because the tiny backward-slanted projections (papillae) that roughen the surface of her tongue propel the hair down her throat and into her stomach. Unfortunately, Dr. Goldstein explains, the main structural component of the hair – a tough, insoluble protein substance called keratin – is indigestible. While most of the swallowed hair eventually passes through the animals digestive tract and gets excreted intact in the feces, some of it remains in the stomach and gradually accumulates into a damp clump – the hairball.

Its not uncommon, says Dr. Goldstein, for a cat to regurgitate a hairball once every week or two. Aside from inconvenience to the owner, this is nothing to worry about. However, the wad of matted hair can pose a serious health threat it if grows too large to pass through the narrow sphincters leading either from the esophagus to the stomach or from the stomach to the intestinal tract. Also threatening, he notes, is a hairball that manages to pass into the small intestine and become tightly lodged there. “This is uncommon,” he notes, “but it is very serious when it does occur. Without surgical intervention, it can be fatal.”

Relieving the Obstruction. A cat that is lethargic, refuses to eat for more than a day or two or has had repeated episodes of unproductive retching or true vomiting should be examined by a veterinarian without delay, he advises. Its possible that the frequent hacking has nothing at all to do with hairballs. It may instead be a sign of another gastrointestinal problem or of a respiratory ailment, such as asthma, in which case emergency treatment may be necessary.

Diagnosis of intestinal blockage is based on physical examination, bloodwork, X-rays, perhaps ultrasound, and a history of the animals pattern of hairball regurgitation. If a blockage is detected, surgery may be required in order to remove the hairball. More often, however, therapy will center on protecting the intestines through several days of clinical care that includes the use of a laxative to move the hairball through the digestive tract.

Although laxatives may be effective in enabling passage of a stubborn hairball, Dr. Goldstein strongly advises owners never to give their cats a laxative without the approval and supervision of a veterinarian. The same advice applies to the use of commercial diets that claim to be effective in preventing or relieving such an obstruction.

Cats Most Susceptible. Kittens and young cats are less apt to develop hairballs than older cats that, as well-experienced groomers, are likely to spend a good portion of their waking hours busily licking their coats. Long-haired breeds – such as Persians and Maine Coons – may be at greater risk for developing hairballs than are short-haired breeds.

Also, he points out, excessive self-grooming and subsequent ingestion of hair may be a sign that an animal is experiencing a food allergy-related skin problem, in which case consultation with a veterinary nutritionist or dermatologist would be advisable.