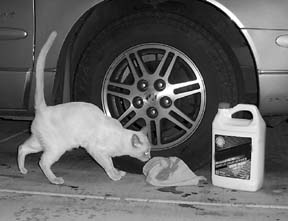 Antifreeze in your car radiator is good. It will help keep the engine purring nicely during cold winter weather. But antifreeze in your cat is bad. Indeed, it is apt to put an end to her purring forever. Without emergency veterinary care, she could very well die within hours after ingesting as little as a teaspoonful of the stuff. Even with prompt treatment, says Larry Thompson, DVM, PhD, a cats chances of surviving antifreeze poisoning are doubtful.

The active ingredient in most brands of antifreeze is ethylene glycol, a sweet-smelling and presumably sweet-tasting liquid that may attract a cat that lacks ready access to her water bowl. According to Dr. Thompson – a clinical toxicologist at the University of Georgias College of Veterinary Medicine – the most likely candidate for ethylene glycol poisoning is an animal that has been inadvertently locked in a garage with no source of refreshment other than a carelessly overlooked puddle of antifreeze on the floor. Predictably, many cases of ethylene glycol poisoning occur during winter months, when people – including cat owners – routinely top-off the supply of antifreeze in their car radiators.

The Metabolic Process
Antifreeze toxicity occurs in two phases, says Dr. Thompson. In the first phase, a cat that has just ingested antifreeze will appear to be intoxicated, as if shes been imbibing alcohol. Shell be disoriented and poorly coordinated. Shell stagger and stumble about drunkenly as the ethylene glycol is being absorbed from her gastrointestinal system into her bloodstream. Then, after an hour or so, this inebriated behavior will abruptly cease and, as Dr. Thompson puts it, Fluffy will seem to be better. In truth, however, Fluffy is not better, as the second phase of toxicity is already underway.

In this phase, the ethylene glycol – now fully absorbed into the bloodstream – starts being metabolized in the liver, an intermediate process in which potentially toxic substances are yielded from the chemical. Within about 12 hours of ethylene glycol ingestion, the proliferation of these metabolites can result in severe acidosis, a condition that dramatically increases the level of acidity in the animals body fluids and may cause sudden death. Lethal acidosis tends to occur, however, only if the cat has consumed a very large amount of antifreeze, Dr. Thompson points out.

Most poisoned cats will survive the acidosis stage, during which the animal will appear lethargic and generally out of sorts. But the metabolites, says Dr. Thompson, continue to go their merry way, being metabolized and producing still other toxic metabolites. If uninterrupted, the process will yield calcium oxalate, a compound that eventually becomes deposited as crystals in the kidneys. In most cases, Dr. Thompson says, these crystals will cause life-threatening renal failure in an untreated cat within 20 or 30 hours after ethylene glycol ingestion.

Emergency Treatment
A blood test by a veterinarian will quickly reveal the presence of ethlyene glycol in a cats system – and emergency treatment will begin immediately. The odds for recovery are fairly good if you spot the poisoning during the cats drunken phase, says Dr. Thompson.

Therapy centers on interrupting the process of ethylene glycol metabolism by an enzyme called alcohol dehydrogenase. This is achieved by getting the cat totally drunk on pure alcohol (ethanol) that is fed intravenously. The alcohol hydrogenase is then kept busy metabolizing the ethanol, says Dr. Thompson, and the ethylene glycol has an opportunity to be excreted intact from the cats kidneys. This is not an easy treatment, because you have to keep the cat stinking drunk – almost comatose – for 24 to 36 hours. And that is a big insult to its physiology, especially for an older or infirm animal.  In addition to the heavy dose of ethanol, the stricken cat is likely to be given bicarbonate, which counters acidosis.

Unfortunately, Dr. Thompson points out, most cases of antifreeze toxicity will go unnoticed during the poisoned animals drunken phase. And the next time that the cat appears sick, he says, will be at 12 hours or so after ingestion and then again at 24 or 30 hours, when the kidney phase has begun. At that point, its an extremely severe problem with a poor prognosis.

At any stage of toxicity, however, a poisoned cats prospects for survival increase substantially with immediate veterinary treatment.