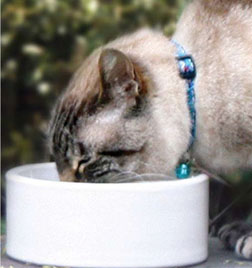 Considering its complex architecture, the delicate interplay of its components with other organs and glands in the digestive system, and the many challenging and vitally necessary tasks it must constantly perform, its no wonder that things might go wrong with the feline digestive tract now and then. They can, and they do.

Digestive system disorders in general are among the most frequently observed health problems in cats. While many of these disorders are primarily associated with organs such as the liver, pancreas and gall bladder – all of which play a crucial role in the digestive process – plenty of them are centered in the alimentary canal, the long and circuitous tube leading from a cats mouth to its anus.

The activities that are supposed to take place along the alimentary canal (also called the gastrointestinal, or GI, tract) begin when a cat takes food into its mouth, chews it into small pieces with its teeth, and allows it to move to its pharynx, the hollow structure at the back of its mouth. From there the food is swallowed, passing into the esophagus – a muscular tube that travels down through the animals chest and opens into its stomach.

Within the stomach, a muscular, bag-shaped organ, the ingested food mixes with potent acids and enzymes that are produced by the stomach lining before moving through a narrow sphincter (pylorus) into the first section of the small intestine (duodenum). There the food mixes with bile, a yellowish liquid secreted by the liver, and with a fluid produced by the pancreas. These substances and their enzymes play a key role in neutralizing the harsh stomach acids and breaking down proteins, fats and carbohydrates so that they can be absorbed through the intestinal lining and into a cats bloodstream.

From the small intestine, the remaining indigestible material passes into the large intestine, which absorbs a substantial amount of the water remaining in the ingested matter. In addition, the large intestine serves as a storage area for the solid material that is left over after the digestive process. This material – the feces – is eventually expelled from the cats body through its rectum and anus.

Unfortunately, this process doesnt always work so smoothly, and some of the most serious problems affecting the feline digestive tract can begin at birth. Probably the most common among these, says Joe Bartges, DVM, PhD, a professor of medicine and nutrition at the University of Tennessees College of Veterinary Medicine, is a cleft palate – a hole in the roof of the mouth that interferes with the initial stage of the digestive process – nursing. Fortunately, he notes, this malformation is infrequently observed in kittens.

Another congenital disorder – a particularly dreadful condition that also is rarely seen – is an imperforate anus. In this disorder, no connection exists between a kittens rectum and the outside of its body. Although the animal may appear normal for its first days or weeks of life, it will inevitably die as feces accumulate, become impacted and irreparably damage its lower bowel.

By far the most prevalent feline digestive tract disorder, says Dr. Bartges, is inflammatory bowel disease (IBD). The condition, characteristically evidenced by chronic vomiting and diarrhea, is widely thought to be the consequence of several different disorders involving the feline immune system. The changes that are consistently found upon microscopic analysis in the lining (mucosa) of an affected cats intestines – a superabundance of immune system cells, for example – suggest that abnormal immune system activity may precipitate the disease.

The process involved with IBD, says Dr. Bartges, is as follows: “Something initially damages the intestinal tract and makes it sort of leaky. As a result, certain large proteins in the animals food that should be broken down before they are absorbed are instead absorbed without being digested. Then these large proteins are recognized as alien substances by the immune cells that line the intestinal tract, and that sets off the inflammatory immune response. In time, this inflammatory response damages the mucosa.” Although IBD is most frequently diagnosed in older cats, advanced age in itself has not been conclusively identified as a risk factor for the condition, and the disorder can affect animals of any age. And although chronic vomiting and diarrhea are the most common clinical signs of the condition, other indications that a cat is afflicted with IBD include decline in appetite, weight loss, frequent passing of gas, audible rumbling in the animals gut, difficulty in defecating and blood or mucus in the stool.

“IBD is diagnosed in two-thirds to three-fourths of all feline digestive system diseases,” says Dr. Bartges. However, it is a disease in which morbidity (the incidence of the illness) is high but mortality (the rate of death from it) is relatively low, although some affected cats may have to be euthanized due to uncontrollable vomiting, diarrhea and malnourishment.

As the mouth is considered to be an indispensable functional component of the GI tract, it follows that dental disease must be viewed as a disorder of the digestive system. As such, says Dr. Bartges, it ranks second-highest in prevalence, after IBD, among cats of all ages and possibly as the number-one digestive disorder among geriatric cats.

Among the various dental problems that can afflict a cat, the most common is periodontal disease, which occurs in an estimated 85 percent of cats over the age of six. In this disease, layers of plaque accumulate and harden on a tooths surface. Bacterial poisons from the plaque eventually prompt an inflammatory response in the gums that, if untreated, leads to severe gum inflammation (gingivitis) and, if not treated promptly, to infection and irreversible destruction of the tissues supporting the teeth (periodontal disease).

Any oral infection, of course, can become systemic and ultimately life-threatening; certainly, a cat with periodontal or any other type of dental disease is likely to have a diminished interest in its food, with potentially severe physiologic and behavioral implications. In any case, such an animals digestive process may well be terminated before it has even begun.

Among other relatively common disorders of the digestive tract, Dr. Bartges cites tumors, which can be either benign or malignant, and can develop anywhere within the digestive system or migrate there from other parts of the body. Squamous cell carcinoma, for example, may develop in a cats mouth, he points out. And in the intestine, a tumor can cause a blockage resulting in frequent episodes of vomiting and diarrhea. If such growths remain untreated, they can spread, increase in size and eventually prove fatal.

Inflammatory conditions other than IBD are also frequently seen. They are often caused by infection with such microorganisms as feline immunodeficiency virus (FIV), feline panleukopenia virus (FPV) or – especially in kittens – feline coronavirus (FCoV), which, in rare cases, can lead to feline infectious peritonitis virus (FIP) (see page 5). Digestive system inflammation can also result from an allergic reaction to food or an environmental allergen.

In addition, Dr. Bartges and his colleagues often see cats that have failed to disgorge a hairball – a damp wad of undigested hair, moistened with bile and other digestive fluids, that has been ingested during grooming. A cat will normally regurgitate a hairball when the mass becomes sufficiently large and irritating. It is possible, however, for a hairball to pass from an animals stomach into its intestine and create a potentially life-threatening blockage in the tract.

The feline digestive tract can be severely assaulted by the ingestion of such toxins as insecticides and household cleaners, and by certain poisonous plants, such as Easter lilies and rhododendrons. Dr. Bartges notes that the digestive system is also prone to serious damage resulting from, for example, penetrating bite wounds, falls from great heights and the ingestion of foreign objects, such as sewing needles and lengths of thread.

Cat owners can minimize the chances that their animals will experience a serious digestive tract disorder, Dr. Bartges advises, by using “common sense.”

“Make sure, for instance, that your cat is up to date on its vaccinations,” he says. “Dont leave small objects lying around that it might swallow, and try to keep the animal away from plants that might be poisonous.

“And see your veterinarian if your cat vomits or has diarrhea frequently or intermittently or seems to lack interest in its food.”