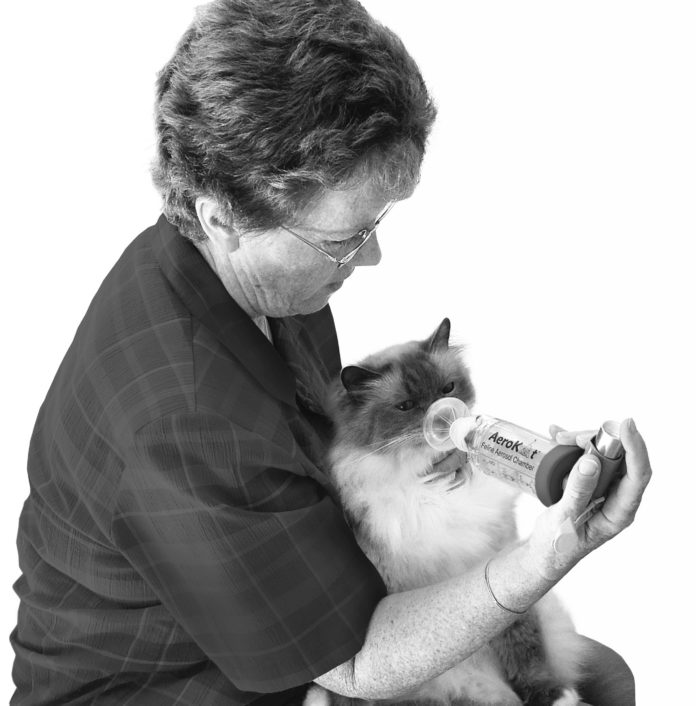 You may be accustomed to hearing your healthy and usually demure cat making hacking noises to try to bring up a hairball. But you’d be wise not to ignore these sounds. They could be an indicator of asthma, an inflammation of the airways that can make breathing difficult. A persistent cough warrants a veterinary exam as soon as possible.

As with humans, the chronic condition is manageable in felines, especially if discovered early. “Once you’ve ruled out other potential diseases, getting your cat on a therapy plan is very important because of the life-threatening nature of respiratory distress,” says Andrea N. Johnston, DVM, DACVIM, a Clinical Instructor in small animal medicine at Cornell University College of Veterinary Medicine.

In addition to the cough — the most common clinical sign of the disease — affected cats will wheeze and breathe through the mouth. An estimated 1 to 5 percent of cats have asthma, the result of an abnormal immune reaction to inhaled allergens. It’s typically seen in those 2 to 8 years of age, with Persian and Himalayan breeds particularly predisposed.

Researchers are trying to identify the genes in these breeds — as well as in other cats — that might make them more susceptible to asthma. Once the genes are identified, the particular mechanism they control that has gone awry can be addressed.

Although it’s likely to be many years before genetic research shows practical results, searches for more immediate treatments are under way. For example, a study at the University of Missouri is investigating a potential therapy called allergen-specific immunotherapy (ASIT), which could be delivered as an inoculation — similar to the type of shots that humans get to treat hay fever and other allergies.Meanwhile, administering steroids and removing environmental triggers have been the usual way to deal with the disease in the long term.

Symptoms of asthma can mimic those of other diseases, from heartworm and pneumonia to cancer. For a definitive diagnosis, Dr. Johnston recommends a chest X-ray, complete blood workup, urinalysis and fecal flotation. In addition, she usually suggests a tracheal wash, which provides a sample of fluids and cells in the lungs, in part to make sure that no bacterial infections are present. “Even though that’s rare,” she says, “we have to rule it out before we do steroid therapy, because we are going to immunosuppress the cats to some degree, and we don’t want to have an underlying infection at the same time.”

Emergency Treatment. The treatment your cat’s veterinarian will choose depends on the severity and persistence of the symptoms. In emergency situations, when your cat can’t catch his breath, he’ll need a bronchodilator — a medication that opens up the breathing passages — such as albuterol, often administered through an inhaler.
Maintenance therapy in moderate cases of asthma usually involves medications that reduce airway inflammation or modify the cat’s immune response, usually steroids such as fluticasone propionate and prednisone, which can be inhaled or taken orally.

The AeroKat Feline Aerosol Chamber, a cat-sized mask with an inhaler that delivers a metered dose of the prescribed medication, was developed specifically to treat feline respiratory diseases. The cost of the chamber varies from about $80 to $100.

Dr. Johnston recommends inhaled steroids whenever possible because they go directly to the lungs, and side effects of long-term systemic usage such as diabetes mellitus can be minimized. “Often cats can be on a higher dose of steroids for a short term and then get on extremely low doses, but they do need to stay on them because we can’t knock out the inflammation completely,” she says.

Because cats and humans get similar forms of asthma and research is being done on the disease in both species, it’s only a question of time before new treatments are found.