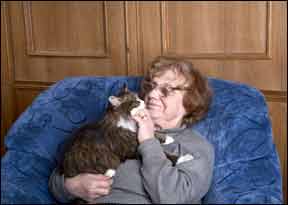 The typical cat will spend up to 18 hours a day sleeping and as much as 50 percent of its waking hours meticulously grooming itself. In addition to persistently licking its coat in order to keep it clean and free of dirt and parasites, the animal will pay special attention to its claws, which serve it well as invaluable tools and, when the need

“A cat in the wild uses its claws for a wide variety of purposes,” says William Miller, VMD, medical director at Cornell Universitys College of Veterinary Medicine. “It will use them to scratch its skin when it itches, mark its territory, provide traction when it wants to climb a tree trunk, or dig a hole to go after a mouse. A cat will also use its claws to conceal its scent from predators by scratching dirt over a spot where it has urinated or defecated.”

In the course of their routine activities, most cats – especially those that spend a lot of time outdoors – will be able to maintain their claws at proper length, notes Dr. Miller. Cats that live mainly indoors will usually be able to accomplish this as well if they have access to a sturdy scratching post. In some cases, however, a cats claws can become too long, a situation that can have harmful implications for the animal and possibly its owner.

Painful Results. One such consequence, he points out, is an ingrown claw (otherwise known as onychocryptosis), a condition in which an overgrown claw curls and cuts into an animals paw pad. This condition can occur in any of the toes but is usually found in one of the two dewclaws, the comparatively small and essentially nonfunctional structures that are located on each of a cats front ankles.

“An ingrown claw,” says Dr. Miller, “is bound to be very painful and can become a serious problem if it becomes infected. Because cats are grooming animals, they can usually relieve an ingrown nail themselves by chewing and licking at it. But attentive owners can spot an ingrown nail and have it treated by a veterinarian.”

Owners who allow a cats claws to become overgrown are at risk for serious consequences themselves, Dr. Miller points out. “A cats claws can carry many disease-causing bacterial, fungal and viral agents,” he says. “So if a cat that has long claws leaps into your lap and digs its claws into you, its possible that your skin can be punctured and one of these agents can be delivered deep into your tissues.” One disorder that can be transmitted in this way is the appropriately named cat-scratch disease, a bacterial infection that causes swelling of the lymph nodes and is especially threatening to people with compromised immune systems.

Starting Early. Owners should routinely monitor the condition of an animals claws and make sure that claws are appropriately trimmed. “Its an easy thing to do,” says Dr. Miller, “especially if you begin the process when the cat is a kitten. If youve developed the routine, you can use an emery board. Just take the cat in your lap while youre watching TV and do a couple of claws a night. Or you can use a mechanical clipper and do it every two weeks or so.”

Of course, he adds, “Some cats will fail to see the humor in this activity and will bite and scratch. In that case, youll have to take the cat to a veterinarian or a professional groomer who will know how to deal with the animal.”