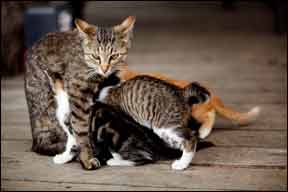 When your lovely new purebred kitten reaches maturity, you may want to breed her, and you may already have a carefully worked-out strategy for doing so. Otherwise, there is no good reason to avoid having your new pet spayed while shes still in the early months of her life – and there are a number of compelling reasons for doing

First and foremost among these reasons, says Andrea Looney, DVM, a lecturer in anesthesiology at the Cornell University Hospital for Animals, is that spaying – also called ovariohysterectomy – will help curb rampant feline overpopulation. According to the American Society for the Prevention of Cruelty to Animals, millions of feral and unwanted domestic cats are born each year. They are either abandoned or relegated to frequently overcrowded shelters and a dismal existence that is often relieved only by euthanasia.

Helpful for Health. Moreover, Dr. Looney points out, spaying a female kitten at four to six months of age – when her reproductive organs are nearing maturity – will dramatically reduce her susceptibility to several life-threatening disorders associated with the feline reproductive system. For example, spaying a kitten prior to her first heat – before her breast tissue develops – will virtually eliminate her risk for mammary cancer later in life. Also, since spaying entails the removal of a females uterus, Dr. Looney notes, the procedure rules out the possibility of pyometra, a potentially fatal collection of pus in that reproductive organ.

Other conditions that are prevented by removal of the reproductive organs include vaginal hyperplasia, a gross swelling of the vaginal wall that occurs during the normal heat cycle; uterine torsion, a twisting of the uterus that may occur late in pregnancy; uterine prolapse, the bulging of the uterus into the vagina; and a variety of infections, cysts, and cancers of the uterus and ovaries.

Also worth noting is the fact that spaying prevents a female from going into heat, a mating activity that typically occurs several times a year. Each of these cycles can last for several days – weeks perhaps – during which a cat may howl incessantly, claw furniture and persistently demand your attention. Spaying, of course, will remove these periodic nuisances from the cat owners life.

A Brief Procedure. If things go smoothly, says Dr. Looney, the spay procedure can be completed within as brief a time as 15 to 20 minutes. Although a cat may drink as much water as she wants prior to surgery, she must consume no food for at least three to four hours before the operation, since general anesthesia, which is always required, may cause nausea and vomiting. This can be extremely dangerous for a sedated animal.

The operation typically entails the following:

Possible complications during surgery-such as internal bleeding, reaction to anesthetic, or sudden drop in blood pressure – are rare and in most cases easily reversed. It is remotely possible, says Dr. Looney, for the surgical site to “break down” postsurgically and create an opening into the abdomen, but she notes that such events occur in only one or two percent of feline spaying procedures.

In some cats swelling (seroma) caused by fluid that seeps in as the wound begins to heal may occur beneath the skin along the line of the incision. Although the swelling will soon resolve itself naturally, the owner can apply warm compresses to the incision area in order to decrease any accompanying discomfort.

Post-Op Progress. A spayed cat usually wakes up immediately after the surgery, although she may be somewhat groggy and unstable. Within an hour or so, however, shell be stable and fully able to move about. If the spay is done in the morning, the animal may be ready to go home by evening, although it may be preferable to keep her at the clinic overnight for observation.

At home, the cat should be supervised closely and kept as quiet as possible for a week or so in order to prevent any abdominal incisions from herniating. Occasional bouts of coughing and sneezing may occur. This would be due to irritation caused by the tubes that were placed in her throat during surgery, and it will cease within a few days.

On the day after surgery, she should eat only a light meal; on the following day, she can begin to consume her normal diet. Owners are advised, however, to monitor a spayed cats caloric intake, since cats that have undergone the procedure have a decreased metabolism and tend to gain weight more easily than they did prior to surgery.

What to Expect. Within about two weeks, the animal is likely to be exactly the same as she was before the operation – except that she is now lacking her reproductive organs. Does a spay procedure require the services of a veterinarian who specializes in feline gynecologic surgery? Not at all, says Dr. Looney. “Any licensed graduate of an accredited veterinary school can perform the operation,” she says.

The cost of the procedure will range, roughly, between $65 and $200, she adds, depending largely on the type of veterinary facility and the locale in which it is located. For owners who are pressed for money, she points out, many shelters offer discount plans for individuals who can provide proof of financial need. Additionally, the older a cat becomes, the more expensive the spay surgery will be.