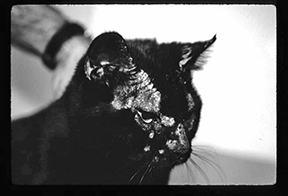 Fungal spores invisible to the naked eye cause ringworm. If a cat digs into contaminated soil or tangles with a ringworm-infected feline and develops this common skin infection, he can transmit it to other cats, dogs and even humans. The malady can affect the skin, hair and claws and take up to a year to resolve. And despite its name, it has nothing to do with worms.

“Ringworm is a very old term and was coined when people thought the lesion was caused by a worm — a larva to be more precise ­— in the skin,” says dermatologist William H. Miller, Jr. VMD, Medical Director of the Companion Animal Hospital at the Cornell University College of Veterinary Medicine.

No Early Signs. Initially, cats don’t necessarily show signs of the disease, though they will be contagious. As it progresses, owners may see a rash, circular bald spots, scaly or crusty skin, stubbly hair, altered hair color, dandruff and excessive grooming. The infection can also develop in hidden areas between the claws. Hair from the infected cat will fall off his body, spreading fungal spores on surfaces and objects that can infect others for long periods of time. New animals — and people — can become infected when the hairs come into contact with the skin. Animals and people with immune deficiencies or pre-existing skin diseases are much more susceptible because their skin is already damaged.

On the bright side: “Normal skin is hard to infect,” Dr. Miller says. “So if you take a fungal organism and sprinkle it on perfectly normal skin, the chances are really good that will just fall off and not cause any infection. It may, but in many cases it doesn’t.”

A Persistent Presence. It’s a myth that you can easily rid your house of ringworm once you have it. In a worst-case scenario, some catteries have been forced to euthanize all their animals because ringworm persisted as long as any animals were present, Dr. Miller says.Ringworm spores can float in air currents and drop into deep-pile carpets. “How good is your vacuum?” Dr. Miller asks. In front of a sofa, it’s likely that vacuuming is done well. “But unless you move the sofa,” he says, “you and I will probably miss those hairs in back.”

If you have pristine ceramic tile floors, disinfect surfaces and dispose of items that can’t be disinfected — such as the cat tree ­— then perhaps your house will become spore-free.

If left untreated, a cat’s case of ringworm probably will eventually go away, but “it may take nine months to a year,” says Dr. Miller. Diagnosis can be done in various ways, such as taking a culture or a skin biopsy. “You can’t just look at an animal and say: It has ringworm.”

All but one kind of ringworm is virtually 100 percent curable. Veterinarians typically treat cats with both an inexpensive oral medication and a topical cream or ointment for visible scabby areas. The shortest course of treatment takes 45 days, but many cases take considerably longer. By contrast, an extraordinarily rare ringworm that affects animals with immune deficiency can develop under the skin and be fatal.

The bottom line: Whenever a cat has a dramatic change in his haircoat — or the hair is falling out — it’s always best to consult his veterinarian. ❖