Cat lovers have heard horror stories about toxoplasmosis and pregnancy. A woman infected with toxoplasmosis during pregnancy may not show symptoms but may miscarry or suffer a stillbirth. If the baby is born, damage to the brain, eyes, or other organs may develop later in life.

Luckily, the American College of Obstetricians and Gynecologists (ACOG) is no longer advising against cats. The ACOG statement says: “You may have heard that cat feces can carry the infection toxoplasmosis. This infection is only found in cats who go outdoors and hunt prey, such as mice and other rodents. If you do have a cat who goes outdoors or eats prey, have someone else take over daily cleaning the litter box. This will keep you away from any cat feces. If you have an indoor cat who only eats cat food and doesn’t have contact with outside animals, your risk of toxoplasmosis is very low.”

This is a relief for cat lovers everywhere, but it doesn’t change the fact that toxoplasmosis (caused by the protozoa Toxoplasma gondii) is a significant zoonotic disease. The Centers for Disease Control and Prevention (CDC) has identified this protozoal parasite as one of five neglected parasitic infections of people due to its high prevalence. More than 40 million people in the United States are thought to be infected or exposed to toxoplasmosis.

For most people and cats, toxoplasmosis is a minor illness. Up to 50% of all cats in some areas show antibodies to T. gondii without ever showing any illness. Immunocompromised cats are at greatest risk of clinical illness, including cats with FELV (feline leukemia virus) or FIV (feline immunodeficiency virus) as well as young kittens who have immature immune systems.

Cats are definitive hosts for Toxoplamsa gondii, which means a cat is required as a host species for reproduction of the organism. Cats are the only animals that pass oocysts, the environmentally-resistant infectious stage of the parasite, in their stool to infect other animal species (including people).

Shed oocysts become infective in one to five days and can survive for months to years in the environment. At some point, the oocysts are eaten by rodents or birds, or they are ingested by people or animals that consume plants or water that is contaminated with cat feces.

The infective oocysts are only shed for a short period (one to three weeks) during an active infection. Your cat may not show signs of illness unless she is immunocompromised in some way. Even then, the shedding period is generally over before illness is evident.

Signs of illness in infected cats can involve a wide range of body systems. Symptoms may start out mild and worsen over time with chronic infections. Fever, lethargy, and not eating well are common but nonspecific. Weight loss may be noted in chronic cases. Many cats will eliminate the infection at this stage or respond to treatment.

More serious symptoms include pneumonia with difficulty breathing or hepatitis (infection of the liver) with accompanying jaundice. The heart may develop myocarditis (inflammation of the heart muscle). The most serious signs can involve the spread of the disease to the eyes and central nervous system. Once these systems are attacked, cats may show abnormal pupil size and responsiveness to light, blindness, lack of coordination, heightened sensitivity to touch, personality changes, circling, head pressing, ear twitching, difficulty chewing and swallowing food, seizures, and loss of control over urination and defecation.

People can become infected by eating infected meat. If the meat is not thoroughly cooked or not handled with proper hygiene, people can accidentally ingest cysts. Rarely, milk from infected cows and goats may contain an intermediate stage of T. gondii.

People also can be infected through gardening in soil contaminated by the feces of cats shedding the oocysts, but this is less common. Cats only shed infective oocysts for a short time, and gardening with gloves and practicing normal hygiene should prevent ingestion of any oocysts. Infection via consumption of uncooked vegetables that are contaminated with oocysts is also possible. Any outdoor sandboxes should be covered to prevent cats from defecating in them.

The CDC warns that people at greatest risk of infection are pregnant women and immunodeficient individuals. In utero infection is of the greatest concern, as one-third to one-half of infants born to mothers who acquired toxoplasma during pregnancy are infected. People with severely weakened immune systems, such as individuals with HIV infections, those on chemotherapy, and those who have recently received an organ transplant are at a higher risk of severe toxoplasmosis symptoms.

Theoretically, diagnosis can be done via a fecal evaluation, but most cats are diagnosed via blood tests looking for antibodies. The antibodies only show that your cat was infected with T. gondii at some time, not necessarily that your cat is infected now.

Two types of antibodies are routinely evaluated when checking cats for toxoplasmosis infections. High levels of IgG antibodies indicate that your cat was exposed and is most likely currently immune to this parasite. Cats with high levels of IgM antibodies are more likely to be suffering from a current infection and may be excreting infectious oocysts. The Companion Animal Parasite Council says cats that have antibodies are unlikely to shed oocysts again after that initial infection. The incidence of positive titers (presence of antibodies) in American cats has ranged from 16 to 100%, depending upon the region evaluated.

The Animal Health Diagnostic Laboratory at Cornell runs tests for toxoplasmosis. Elisha Frye, DVM at the Veterinary Support Services reports, “Our serology lab performed 119 feline Toxoplasma gondii IgG ELISAs on serum from 3/2019-2/2020, of which 24.37% were positive. From 3/2020-2/2021, 103 samples were tested and 38.83% were positive. This is not limited to New York state. Most of our samples are from the Northeast, but we do receive samples from across the country and internationally as well. This data was not stratified to include geographic location of sample submission. This testing does not detect IgM (the antibody that presents with early/acute infection).” The positive cats were all cats that had been exposed and were likely to be immune due to their antibody response.

If T. gondii oocysts are identified on a fecal evaluation, it is recommended that the cat be quarantined for three weeks to avoid the risk of human infection. This is most important if there is a pregnant woman or any immunocompromised people in the home.

Even infected cats only shed the oocysts for a short time. In addition, the oocysts need from one to five days to become infective. If your litterbox is cleaned daily, your risk is minimal. If your cat has been found to be shedding oocysts, it is difficult to totally sanitize a litterbox, as oocysts are hardy in the environment. Use disposable litter pans until the shedding is over.

Treatment for toxoplasmosis is usually the antibiotic clindamycin (Cleocin), which may be combined with a corticosteroid to reduce inflammation, especially if there is eye or nervous system involvement. Most cats show a positive response in two to three days, but the full treatment of two to four weeks should be followed. If treatment starts early, it may limit shedding of oocysts. Alternative treatments are trimethoprim sulfa (Bactrim) or pyrimethamine plus a sulfonamide (Fansidar).

Preventing toxoplasmosis infections in cats requires limiting or preventing access to potentially contaminated meat, whether raw food or outside hunting and eating rodents or birds. Indoor cats are less likely to be infected. 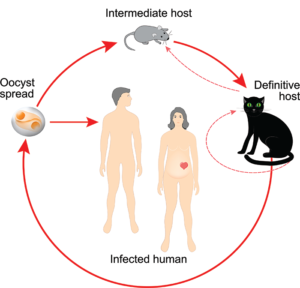 The oocyst stage is the infective stage. The oocysts can survive months to years in the environment and are what your cat leaves in the litterbox. At the bradyzoite stage in cats and other vertebrates, the organism can slowly multiply but not move. The encysted stage is the tachyzoites, which are found in intermediate hosts like food animals, and can be infective if eaten. This rapidly dividing life stage is responsible for symptoms.

A small but growing subset of immunocompromised cats includes cats that have had renal (kidney) transplants. The anti-rejection medications they take lowers their immune responses. A recent study from the University of Pennsylvania looked at both T. gondii antibody positive and negative cats post-transplant. The positive cats were all put on long term (basically lifelong) prophylactic treatment for T. gondii. Those cats did fine. Eight cats were seronegative or of unknown status; they were not put on prophylactic treatment.  Those cats all became positive after transplant as a result of the immunotherapy to prevent rejection of their kidneys. Sadly, six of these untreated cats died of toxoplasmosis.