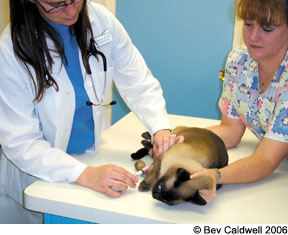 Due to the demonstrable effectiveness of vaccines in preventing a wide variety of infectious feline diseases, veterinarians used to recommend that every cat be injected every year with every available vaccine.

In the past 15 years or so, however, this approach to preventive therapy has come into question for several reasons. Although the vaccine safety and efficacy record overall is very good, it has now become clear that vaccination can sometimes lead to clinical disease. It is remotely possible for vaccines to damage developing fetuses in pregnant cats or to stimulate allergic reactions, and for improperly placed injections to cause severe nerve injury. And although uncommon, vaccines and the equipment used to administer them, if poorly maintained or stored, can become contaminated with infectious agents that can be transmitted by injection.

Perhaps most worrisome is the recognition that certain potentially lethal cancers -so-called vaccine-associated sarcomas – may, for as-yet unknown reasons, develop at the point on a cats body where a vaccine has been injected.

The current belief is that these cancers – also referred to as injection-site sarcomas – develop almost exclusively in felines, with most studies indicating that they occur in approximately three in every 10,000 vaccinated cats. Although the incidence of vaccine-associated sarcoma is low compared to that of many other feline diseases, its incidence is among the reasons why veterinarians now seriously question the wisdom of vaccinating all cats annually with all available vaccines, despite their proven efficacy in preventing viral infections, which can often have deadly consequences.

Abnormal Cells
A sarcoma is an uncontrolled proliferation of abnormal cells that do not respond to the bodys normal regulatory signals and eventually accumulate in the form of a tumor (neoplasm). These tumors are malignant; they grow rapidly and are highly invasive, spreading (metastasizing) to neighboring tissues and potentially to other tissues throughout the body.

Whereas another type of malignant cancer – a carcinoma – develops on the internal and external surfaces of the body, sarcomas originate in the cells within the bodys connective tissues – bone, muscle, cartilage and fat. Due to their potential for spreading, sarcomas are often difficult to remove surgically and are generally far more dangerous than benign tumors, which develop more slowly and do not invade other regions of the body.

The most frequently observed type of vaccine-associated sarcoma is fibrosarcoma, a malignant connective tissue tumor named for the specific kind of cell – a fibroblast – in which it originates. Most other types of vaccine-associated tumors are named for the kinds of tissue in which they develop. (Osteosarcoma, for example, originates in bone tissue, and liposarcoma develops in fatty tissue.)

Cause and Effect
Vaccine-associated sarcomas began to appear in the mid-1980s, concurrent with the widespread use of killed rabies vaccines and feline leukemia virus vaccines in cats. But veterinary scientists have yet to identify specific components within any vaccines that lead to the development of a sarcoma. A commonly accepted theory is that a sarcoma develops at an injection site as a consequence of inflammation and the changes in cellular processes that result.

Thats one of the theories that we currently have, says James Richards, DVM, director of the Cornell University Feline Health Center and editor-in-chief of CatWatch. Different cells are moving along with different chemicals. An animals inflammatory response is a very complicated process, and not all inflammation is the same. But even though we dont know the exact cause of sarcoma, it would be irresponsible for veterinarians to sit back and not deal with this problem. We have to take our best current information and make the changes in vaccination recommendations that we think are most appropriate.

Signs of Disease
Veterinary experts recommend that cat owners conscientiously look for signs of vaccine-associated sarcoma in their cats during the weeks and months that follow a vaccination procedure. They suggest that, while casually stroking an animals fur, the owner should check the vaccination site and surrounding area for the development of any small, firm, apparently painless lump under the skin.

If a lump is discovered, it will almost always be of no consequence and will disappear after several weeks. However, a sarcoma may be present if the lump increases noticeably in size one month after vaccination, if it persists for more than three months, or if it is larger than two centimeters in diameter (about the size of an olive). If any of these criteria are met, biopsies of the lump should be taken and evaluated by a veterinary pathologist.

Since early diagnosis and treatment yield the best prognosis, prompt veterinary attention is vitally important, says Dr. Richards. If sarcoma is diagnosed, immediate surgery to remove it is likely to be recommended. Such surgery may be augmented with chemotherapy or radiation treatments.

Unfortunately, surgery is apt to have limited success, since microscopic branches of a cancerous growth may remain and result in redevelopment of the tumor. One study has shown that nearly two-thirds of vaccine-associated sarcomas recur within six months after surgical removal.

Reducing the Risk
Theoretically, says Dr. Richards, the only way to absolutely prevent vaccine-associated sarcoma is to avoid vaccinations entirely. However, he notes, that would be unwise, since a cat that has not been appropriately vaccinated will likely be at significant risk for becoming infected with any number of viruses, perhaps fatally so, and for spreading a dangerously virulent disease to other animals and – in the case of rabies – to humans as well.

The best way to minimize the chances that your cat can be afflicted with vaccine-associated sarcoma, says Dr. Richards, is to minimize the number of injections that it receives during its lifetime. Rather than making sure that your cat receives injections of all available vaccines each year, he suggests, consult your veterinarian regarding your animals specific lifestyle, risk factors for infection, age and other factors, and base its vaccination plan accordingly.

The overall goal, Dr. Richards points out, is to make sure that your cat is adequately protected from infection while at the same time reducing the number of injections it receives and, consequently, its risk for vaccine-associated sarcoma.