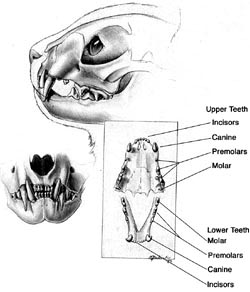 Kittens, like humans, are born with no exposed teeth. The teeth are present, however, just beneath the surface of the gums and begin to erupt at about 3 weeks. By 6 to 8 weeks of age, the full set of 26 deciduous – also known as primary or baby – teeth should be in place.

At 12 to 14 weeks, these deciduous teeth begin to fall out and are replaced by 30 permanent or secondary teeth. Fraser Hale, DVM, explains: There are three adult incisors top and bottom, one canine top and bottom, three upper and two lower premolars, and one molar top and bottom on each side.

Here comes the tooth fairy!
Kittens may be mouthy during teething, wanting to chew on soft things like soft-chew toys or a friendly hand. They may have difficulty eating hard food, and they may salivate more than usual and have bad-smelling breath. Occasionally when a tooth is lost, the gums bleed slightly.

Dont introduce the toothbrush during this stage! Once all the permanent teeth have erupted and the pain of teething is over, it is time to start training the owner and animal in the art of dental home-care, says Hale, who is a diplomate of the American Veterinary Dental College.

Teeth trouble
Occasionally, teeth erupt out of proper alignment (maloccluded), or they do not erupt at all. Cats with short, pushed-in faces simply dont have enough jaw to support normal dental development. Persians and Himalayans are more inclined to have malocclusions due to the shape of the skull and jaw bones, says Hale. I see missing teeth in all breeds. Hale says the teeth that are most often missing are the first premolars and the molars. These teeth do not have a deciduous predecessor, he adds, so you cannot tell by looking in the kittens mouth if the permanents are going to show up or not.

A missing tooth is different from an unerupted tooth, emphasizes Hale. Failure to detect and extract an unerupted tooth will often lead to the development of a dentigerous cyst, he says. These cysts destroy bone tissue and can result in the loss of surrounding teeth. Because unerupted teeth can only be seen on x-ray, veterinary dentists often recommend that the first dental examination includes intraoral radiographs.

Many orthodontic problems also result in abnormal and painful contact between teeth or between teeth and gums. In some cases, selective extraction will provide sufficient space to eliminate the problem. But a variety of solutions, including interceptive orthodontics, are now available to correct dental problems due to malocclusion.

Dental injuries
Because cats tend not to chew on hard objects, dental injuries are more likely to occur with external trauma. Anytime a kitten has a nasty fall or landing or gets underfoot, the owners should check it over for signs of injury, including the mouth, says Hale. With young animals, he adds, saving fractured teeth often depends on quick treatment. In animals under 1 year of age, the tooth may be repaired and even kept vital after a delay of 48 or even 72 hours. Crown fractures in cats under 1 year of age, even up to 18 months old, should be considered emergencies and treated without delay, emphasizes Hale.