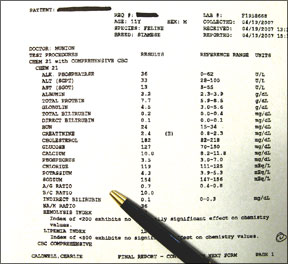 Your cats blood serves the same essential function that yours does, carrying oxygen and nutrients to tissues throughout the body and transporting carbon dioxide and wastes away from those tissues. Blood also serves in such processes as cell development, tissue repair and the warding off of infection. Considering the vital roles performed by this life-sustaining fluid, it is unlikely that any

veterinarian would dispute the wisdom of having your cats blood evaluated at least annually as part of an overall physical exam.

This is especially important for geriatric cats – those that are nine or 10 and older – and for animals that spend most of their time outdoors and are therefore exposed to a host of feline diseases. A routine blood analysis should also be obligatory for any cat that is new to a household and for kittens when they reach one year of age.

Feline blood is made up of red blood cells (erythrocytes), white blood cells (leukocytes), platelets and a colorless fluid (plasma) in which the cells and other life-supporting blood components – such as hormones, proteins and salts – are suspended. All of these ingredients, in their proper balance, are required to maintain a cats physical well-being.

A blood test requires the withdrawal of a small amount of an animals blood, usually from one of the two jugular veins, which run down either side of a cats windpipe, or from a vein in one of its back legs. A thorough test evaluates the blood sample in two separate processes – a complete blood count (CBC) and a blood chemistry panel.

The CBC (also known as a hemogram) includes the following measurements and evaluations:

A packed cell volume (hematocrit) reveals the concentration of red blood cells in the plasma. A low red-cell concentration might indicate that an animal is anemic – either because its bone marrow isnt producing the cells in sufficient numbers or because they are somehow being lost or destroyed. A high concentration could mean that the cat is dehydrated.
A red blood cell count measures the actual number of red cells in a given amount of blood and discerns any abnormalities in their shape, size or color. The amount of hemoglobin – a substance that carries oxygen through the bloodstream – is also assessed.
A white blood cell count evaluates and counts the number of leukocytes (including lymphocytes, neutrophils, monocytes, eosinophils and basophils), all of which are produced in the bone marrow or other tissues and play various roles in attacking and destroying disease-causing organisms. A high white-cell count might indicate, for example, that an animal is harboring an infection, is under extraordinary stress or is affected by a serious and chronic illness, such as leukemia.
A platelet count measures the concentration of thrombocytes, disk-shaped blood cells that promote vitally necessary blood-clotting.

The CBC also measures the protein levels in blood plasma. Low levels of these proteins suggest, for example, the possibility of liver, kidney or gastrointestinal malfunction, while high levels may indicate the presence of infection, chronic inflammation or some types of cancer.

The other process – the chemistry panel – focuses on the chemical components suspended in the clear, watery content (serum) of the blood after it has been separated from the cells and from certain proteins that are needed for clotting.

These tests measure the presence of a dozen or more substances, including blood urea nitrogen (BUN) and creatinine, chemicals that are normally found in excreted urine. The chemistry panel is therefore valuable in assessing a wide range of health-determining factors. It can reveal problems in an animals organ function, for example, and it can measure the levels of necessary hormones. And it can determine whether the blood is sufficiently rich in electrolytes – chemical compounds that regulate the exchange of necessary electrical charges across cell membranes.

In addition, a blood chemistry panel measures total protein content, including albumin and globulins. High or low blood levels of these proteins can influence many bodily processes, including the ability to retain water and to defend against infection.

The value of basic bloodwork is indisputable and – along with patient history, a thorough physical exam and urinalysis – is well established as a fundamental element of modern veterinary practice. Most veterinarians will start with the basic screen because the procedure is noninvasive and provides an abundance of information.