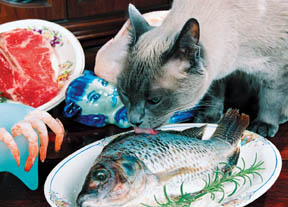 Does your cat nervously scratch the floor around its food bowl before or after dinner? Does it like to lick the legs of your kitchen table? Does she occasionally rip up a ball of yarn…or cart a dead mouse into your living room… or suddenly turn up her nose at the food youve been putting in front of her for years?

These are among the strange and largely inexplicable eating-related – or food-related – behaviors that are quite common among felines, and usually harmless. In general, these and other idiosyncratic activities – as quirky and annoying as they may be to some owners – are by no means as dangerous as some compulsive and self-destructive eating behaviors that are often observed in dogs but infrequently seen in cats.

Uncommon Disorders
Rare, for instance, is the cat that will habitually eat its own feces or those of its housemates. This bizarre disorder, known as coprophagy,  can result in an animals ingestion of harmful – even lethal – parasites that reside in fecal matter. While not unheard of in cats, coprophagy is primarily a behavioral disorder affecting dogs.

Likewise, cats are not much given to pica, an eating disorder that is frequently observed in dogs and is marked by the habitual consumption of indigestible non-food items such as rocks, pebbles, screws and nails. Like coprophagy, pica is a dangerous and potentially fatal disorder, since hard, sharp objects can damage an animals teeth and block or tear its intestines.

Looking for Answers
While cats seem to have better sense than dogs when it comes to eating rocks or feces, animal behaviorists over the years have studied and attempted to explain a wide range of other strange and comparatively harmless feline eating behaviors. In some cases, theyve come up with plausible explanations; in other cases, the motivations behind these anomalous activities remain a total mystery.

According to veterinary nutritionist Tony Buffington, DVM, most unusual feline eating-related behaviors – episodes of extreme finickiness, say, or occasional fabric chewing – are likely to be inconsequential in terms of their long-term impact on a cat (or its owners). But some can be serious or even life-threatening in their implications.

Warning Signals
There are two behaviors that you really have to watch out for, says Dr. Buffington, a professor of veterinary clinical sciences at Ohio State Universitys College of Veterinary Sciences. When a cat either starts eating a ton more food than it usually eats or dramatically lowers its food intake, these are signs that there may be something seriously wrong with the animal, and those behaviors should be brought to the attention of your veterinarian.

Studies have indicated that 25 percent to 50 percent of all house cats are obese. In many cases, a cats habit of consuming as much food as possible, as often as possible, may be attributable to the constant availability of food. An owner who perpetuates this habit through indiscriminate free-choice feeding is putting the insatiable animal at risk for obesity and its severe consequences, such as an elevated risk for diabetes and unhealthy skin.

Equally as perilous is anorexia, a condition marked by a dramatic loss of appetite and the avoidance of food. Sometimes accompanied by alarming weight loss, anorexia is known to occur in association with a wide range of diseases, including conditions involving the upper respiratory system, stomach, kidneys, pancreas, liver, blood or skin.

Anorexia can also signal the presence of brain or nervous system diseases. Among all causes, says Dr. Buffington, the sudden onset of food avoidance can most often be linked to a painful dental problem. In any case, he notes, Loss of food intake is one of the least specific but most common signs that something is going wrong in a cats body.

A third type of feline eating behavior that calls for immediate veterinary consultation is polydipsia – excessive water consumption. If you notice that your cat is constantly at its water bowl, desperately trying to slake an apparently unquenchable thirst, you may be observing the signs of a serious underlying health condition.

Polydipsia is often associated with such life-threatening ailments as diabetes and kidney failure. A cat demonstrating this behavior – usually accompanied by excessive urination (polyuria) – is also likely to be losing weight and to appear lethargic and depressed.

Cats that drink insatiably, are noticeably overweight and eagerly devour all available food, or are visibly anorexic, should undergo a thorough veterinary examination and evaluation without delay. In many cases, diseases causing their eating behaviors can be reversed or at least modified with medication, nutritional adjustment, and other treatment approaches.

In some instances, supportive consultation with an animal behaviorist may be helpful. But before an owner assumes that a cats unusual eating habits are purely a behavioral phenomenon, possible medical causes must be ruled out.

Bizarre but Benign
And what of those weird eating-related habits that may cause a cat owner no end of puzzlement and bother – but pose little threat to an animals health? Animal behaviorists and veterinarians, including Dr. Buffington, consider plausible the notion that much of this activity is probably part of the modern felines genetic makeup, traceable to a time thousands or perhaps millions of years ago when cats ate, slept, foraged, defended themselves, reproduced and raised their young in the wild.

Why, for example, would a cat scratch the floor around its food bowl? Dr. Buffington has observed this behavior frequently in cats that have grown weary of their existing diets or are being offered a new brand of food. Its possible, he says, that they dont like it and are acting out the process of burying it.

Why do some cats like to chew on a scrap of cloth, a piece of cardboard, a ball of yarn or a roll of toilet paper? Some behaviorists theorize that these activities could well be throwbacks to a time when cats had to tear the skin and feathers off their prey in order to get at the meat. Todays housecat doesnt have to do that – but the instinct for ripping and tearing remains deeply ingrained.

Why do cats occasionally drop a dead mouse or bird on your doorstep? Is it, as some owners prefer to think, a token of appreciation for the loving care the animal is receiving? Probably not. More likely, behaviorists tend to agree, the cat is instinctively re-enacting the process of bringing the prey home in order to teach its kittens how to eat.

Why do some cats seem unable to eat and drink without knocking over their food dishes? One theory is that a cats instinct is to swiftly bite into a piece of food, jerk its head up and drag the morsel away to a protected area where it can be eaten in peace. This nervous, jerky approach to dining is bound to upset a food dish or water bowl now and then.

How common are these and other strange eating-related behaviors? With indoor cats that are eating well, says Dr. Buffington, weve found that this kind of seemingly neurotic behavior is rare. But for some cats, the stress of being housed indoors in an unenriched environment can unmask their predispositions.