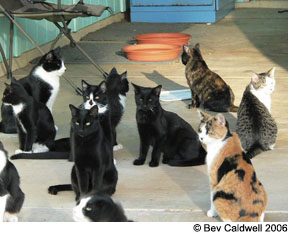 Buddy, a streetwise stray cat that had been rescued from a vacant parking lot, took great exception to a male cat spraying the front door of his adoptive home. To even out the turf war, Buddy decided to launch a counter attack – by spraying the inside of the door.

I saw Buddy positioning [to spray], so I tried to scoot him away from the door, explains Nancy Peterson, information specialist for the Humane Society of the United States in Washington, D.C. He bit me. It wasnt just a little tooth scratch, either. It was a nice bite, she says.  As a former veterinary technician, Peterson was quite aware of the health risks that a cat bite poses – even when the cat is up-to-date on its veterinary care and is vaccinated against rabies.

Health Risks
Of most concern to Peterson was the risk of a bacterial infection. According to one study, 28 to 80 percent of all cat bites result in infection. Infectious agents that can be passed from cats to humans through bites or scratches include: Bartonella (cat-scratch disease), Capnocytophaga (a bacterium found in cats saliva that can cause life-threatening illness in humans when introduced into the bloodstream), Mycoplasma felis (a bacterium responsible for chronic infections), Pasteurella multocida (a bacterium that causes severe infection), Francisella tularensis (an organism that causes tularemia, a disease so severe it was once being developed as a bioweapon), Yersinia pestis (the likely cause of the plague that killed more than 100 million people in the sixth century and five million more in the 14th century), and, of course, the rabies virus.

A bite or scratch from a cat – even a beloved pet – is not something to disregard. Following the recommended protocol for animal bites, Peterson relates that she immediately washed the wound with soap and water, applied an antibiotic salve, and then went to the emergency room, where she received a tetanus shot, an antibiotic injection and a course of oral antibiotics.

Additionally, Peterson was instructed to return to the ER in 48 hours. If the infection showed signs of spreading, she would be given antibiotics intravenously. A cat bite is nothing to ignore, Peterson affirms.

Feline Repercussions
In addition to extensive medical attention, a cat bite also attracts the attention of local health authorities. All bite wounds must be reported to animal control, and the offending cat must be quarantined and observed for symptoms of rabies. This includes pets that have proof of current rabies vaccination. Peterson was able to convince local authorities to agree to a 10-day, in-home quarantine for her vaccinated, indoor cat with a $500 fine if Buddy was allowed outside during this period.

If the biting cat is not vaccinated for rabies, or if the cat is feral or of unknown ownership, the person who has been bitten may be required to begin the rabies vaccination series while the cat is quarantined.  If the bite is received from a cat that cannot be located and captured for quarantine, the person will be required to undergo the rabies vaccination series.

Avoiding Bites
Obviously, the easiest treatment is always prevention. Studies indicate that nearly 90 percent of all cat bites are provoked. In other words, in almost all cases, the human has done something to cause the bite – and the entire situation could have been avoided. If people were more adept at reading body language or heeded signs that the cat was aroused or annoyed, most bites could be avoided, Peterson affirms, adding that, in hindsight, she would have tried distracting Buddy with a loud noise or attempted to shoo him away from the door with a pillow.

Peterson acknowledges that some cats can be very subtle: a hiss, snarl, twitching tail or a slight rise in the cats hair may be the only sign that a cat is reaching its tolerance limit.  With your own cats, it pays to be observant and tuned in to your cat in order to accurately read its often understated signals.

Expecting the Unexpected
Avoiding a bite from an unknown feline is much more difficult than keeping a pet kittys fangs out of your flesh.  As a stranger to the feral or stray cat, you must assume that your presence will be seen as threatening or frightening.  If, however, like Peterson, you cant pass by a cat in need, it is best to be prepared, she says.  Peterson recommends carrying a collapsible cardboard carrier and a leash.  Gloves and a towel or blanket are also recommended.  (Often a blanket can be placed over a cat or kitten and the feline can be gathered up in the blanket.)

Bottom line? Be safe, counsels Peterson. Dont assume a cat [you dont know] is friendly and wants attention. And, if you do get bitten or scratched, wash the wound immediately and thoroughly with soap and water, apply a disinfectant (such as rubbing alcohol, not peroxide) and an antibiotic salve, and seek medical attention immediately from your doctor, a minor-emergency clinic or a hospital emergency room.

Bacterial infections resulting from cat bites and scratches can be ugly enough; however, if you are the unlikely recipient of a rare, dreaded disease (or you are immunosuppressed), you wont want the feline fang to be the cause of serious health complications.