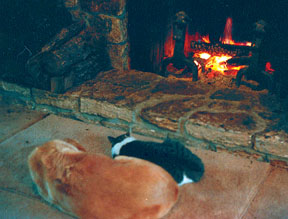 Although indoor cats are far less likely than outdoor cats to contract a contagious disease, be ripped up in a brawl with other animals, or be struck by a car, they are not completely out of harms way. Even within the confines of their own homes, they, too, can suffer serious injuries, not the least of which are disabling (and even fatal) burns that result from a variety of factors, including their natural curiosity and, all too often, carelessness on the part of their owners.

There are three categories of burns: thermal, chemical and electrical:

Thermal burns result from direct contact with flames, steam, hot liquids, or hot objects. They usually are caused by a household accident, most commonly one that occurs in the kitchen. A cat can be scalded by a spilled kettle of boiling water, say, or spattered with grease from a frying pan. Or its paws can be burned as it hops onto the top of a lit stove. However, the kitchen is not the only place where a thermal burn can occur. It can also happen, for example, if a cat is struck by a hot cinder that pops out of an unscreened fireplace.

Chemical burns occur when a cats skin comes in contact with a caustic substance, such as turpentine, lye, or a harsh household cleaning agent. Any of these chemicals can cause a serious burn if it remains on the animals skin for an extended period. A cat can also suffer severe burns on its tongue and in its oral cavity as it attempts to groom a powerful chemical from its fur.

Electrical burns most often occur when a cat chews through a live electrical cord or comes in contact with an inadequately insulated appliance. Burns are usually suffered on the tip of the animals tongue or within its mouth. More threatening than the burn itself is the electrical shock that may occur, which can result in seizures, severe respiratory distress and cardiac arrest.

Mild versus Severe
Electrical burns are the least frequent, says William Miller, Jr., VMD, a professor of dermatology at Cornell Universitys College of Veterinary Medicine, because most kitties dont chew on cords. Thats much more common in puppies. In fact, he notes reassuringly, it is rare that a veterinarian sees a cat that has suffered any kind of burn.

In most cases, he explains, the burn will be trivial and the cat will simply heal by itself. When we do see a burn, its usually a severe injury that may require a surgical procedure to remove dead tissue in order to protect against infection.

The prognosis for a serious burn depends largely on the size of the traumatized area, says Dr. Miller. As long as less than 30 percent of an animals body is involved, he explains, it has a good chance of surviving. But once you get above 30 percent, you get into issues with fluid balance and infection. In a very widespread, very severe case, the most humane thing to do is to euthanize the animal.

Another issue, Dr. Miller points out, involves scarring. If the scarring is just over an area on the cats back, he says, then its just a cosmetic matter. But if the cats legs are burned and the skin is sloughed off, youll probably have to amputate the limb. In humans, you would do a skin graft, but in cat medicine you dont do that because cats dont tolerate grafts very easily.

Emergency Treatment
What should an owner do if a cat suffers a burn? For electrical and chemical burns, Dr. Miller recommends wrapping the cat in a towel or blanket – real carefully – as soon as the burn is identified or suspected and immediately rushing the animal to a veterinary clinic. Regarding thermal burns, the most common type, he advises the following:

As soon as a thermal burn is recognized, put an ice pack on the area. Do not use direct moisture – cold, running water, for example. That can make the cat very cold, cause it to start shivering and possibly make it go into shock. And do not put butter or any kind of ointment on the wound because thermal burns usually have some degree of oozing associated with them, and an ointment can actually drive the fluid in deeper and make things worse. Then take the cat to the veterinarian right away.

If the burns are not severe and are limited in area, says Dr. Miller, a cat can be expected to recover fully within two or three weeks.

Break Dangerous Habits
The best approach to preventing your cat from being burned, says Dr. Miller, is twofold:
First, keep the environment safe for your animal by, for example, making sure that there is a screen in front of your fireplace, that your electrical cords are in good condition, that you properly use and store caustic chemicals and that you exercise great care when using pots or pans filled with hot grease or boiling water while your cat is with you in the kitchen.

Second, do your best to alter your cats risky behavior by, for instance, letting it know in no uncertain terms that you do not like to see it leaping onto your stovetop.

Be consistent in reprimanding it, says Dr. Miller, and you can train it. Cats are pretty intelligent creatures – they catch on.