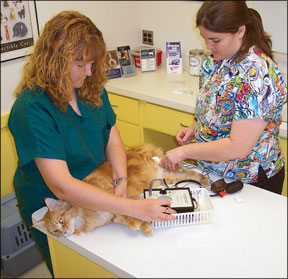 Late one afternoon a while back, a virtually comatose cat was rushed by its distraught owners into the emergency unit of the Cornell University Hospital for Animals (CUHA) in Ithaca, New York. The animal, a neutered two-year-old male, hadnt eaten a bite of food or consumed a drop of water for the previous 24 hours. The night prior to his arrival at the hospital, the cat had spent nearly an hour straining in his litter box, apparently in considerable pain, but had neither urinated nor defecated. When his owners awoke the following morning to find the poor animal vomiting intermittently, they finally agreed that emergency care might be warranted. Lucky for them, not to mention the ailing cat, they moved into action.

By the time they reached the hospital, the cat was breathing with great effort and lying motionless on his side. A team of veterinarians and licensed veterinary technicians immediately noticed that the animals bladder was grossly swollen. Clearly, it had a blockage in its lower urinary tract that prevented the passage of urine. The team went speedily to work, feeding fluids into the animal intravenously while relieving the obstruction in its urethra.

“The cat responded immediately and recovered quickly after that,” recalls Bettina Mayer-Ronne, DVM, a supervising veterinarian in the hospitals emergency and critical care service unit who was on duty that afternoon. “A urinary blockage like that is a life-threatening situation that we often see in cats. If we had not acted as quickly as we did, this cat would have died.”

According to Dr. Mayer-Ronne, she and her CUHA colleagues typically see between 25 and 40 cats each week that have been rushed to the hospitals emergency unit for treatment. “Were open 24 hours a day, seven days a week, 365 days a year,” she says, “and we see these animals around the clock. Things usually quiet down between two and seven a.m., and we tend to be busiest in the evening hours. Thats when owners come home and find their animals sick or injured.”

The staff is well equipped to treat a wide range of disorders quickly and efficiently. “We treat a lot of metabolic diseases,” says Dr. Mayer-Ronne. “Those cats frequently present with vomiting or loss of appetite. And we often see animals that are unable to urinate, especially male cats whose urethras are blocked. That condition definitely calls for emergency treatment.”

Serious injuries also account for a large share of emergencies, she adds, a high percentage stemming from wounds and broken bones sustained by cats that have been struck by automobiles. And cats occasionally present with lethal intoxication resulting from the ingestion of poisonous substances.

Among the many feline conditions requiring emergency treatment, Dr. Mayer-Ronne identifies the following as both relatively common and especially life-threatening:

Urethral obstruction, often caused by the presence of a urethral “plug” usually a mass of protein, cellular debris and crystallized mineral that blocks the narrow passage leading from a cats bladder to the outside of its body. An affected animal must receive immediate treatment; in some cases, a delay of only a few hours can be fatal.
Traumatic wounds and fractures, especially involving a cats spine, chest or abdomen. If a wound is open on the cats body, its owner should cover it with a clean cloth, place the animal in a confining carrier a small box, for example and transport it immediately to a veterinarian for treatment.
Heart failure, a condition, often with abrupt onset, in which an animals cardiac function declines precipitously and, if not treated promptly, is likely to cease altogether. A possible consequence of many feline disorders, heart failure is marked by one or more clinical signs, such as rapid or difficult breathing, profound weakness or fainting, refusal to eat, and occasionally, paralysis of one or both back legs.
Respiratory distress, a condition in which a cats ability to breathe is seriously impaired as the result of disease or injury. Signs include an increased respiratory rate, a dramatic increase in an affected cat’s efforts to inhale or exhale, coughing, a bluish color in its normally pink tissue, and lethargy.

Many other conditions, just as lethal and also requiring emergency care, are seen less frequently at the hospital. As an example, Dr. Mayer-Ronne cites cuterebriasis, a potentially deadly infection that is prevalent in some areas, such as New York state, during the summer months. This disease is caused by fly larvae that enter a cats system via its nasal cavity.

“The larvae climb through the animals nose and into its brain,” she explains, “and when this happens, you certainly have an emergency on your hands. The cat will present with a very high fever and seizures or other neurologic signs. Well treat it with anti-inflammatory drugs, medications that will kill the larvae, and antibiotics that will reduce the risk of secondary infection. With this treatment, if done soon enough, most cats will recover.”

One might expect that the occurrence of feline heatstroke would rise dramatically during the hot summer months. Not so, says Dr. Mayer-Ronne. Although heatstroke is quite common among dogs whose owners have left them alone in overheated cars, the condition is comparatively rare in cats. On the other hand, the arrival at the hospital of cats injured by automobiles rises sharply during the summer.

In warmer months, she explains, cats tend to spend more time outdoors and there are more cars on the road. “We see everything from serious head, chest and lung trauma, lacerations and severe limb damage all of which may require surgery and blood transfusions to cases of shock from which the patient can recover within hours,” says Dr. Mayer-Ronne.

Other than the noticeable peak in business during the summer, she notes, the demand on the hospitals emergency veterinary staff is “pretty steady” throughout the year.

“When a cat is brought in,” she says, “the first thing well do is ask the owner what happened, whats going on. That will give us some indication of what to look for. Then well do a complete physical exam, checking the cats body temperature, heart rate, respiratory rate all of the vital parameters. Well palpate the abdomen and limbs to see if there are any fractures. Well look in the animals mouth to see if there are any broken teeth, any bleeding or any signs of infection. And well check its eyes for anything abnormal. Retinal bleeding, for instance, can be present with hypertension and some injuries.”

The success or failure of the emergency teams efforts to treat a severely ill or injured cat, says Dr. Mayer-Ronne, depends on the condition that is diagnosed and the extent to which the disorder whether disease or injury has advanced prior to the animals arrival at the hospital. So time is of the essence when it comes to emergency treatment, and owners can play a major role in addressing dire situations in which the lives of their cats hang by a thread.

Be Prepared to Act

In a sense, says Dr. Mayer-Ronne, there is not much that an owner can do with a cat that is suffering the effects of a disease that requires diagnosis and treatment by a well experienced team of emergency veterinarians and technicians. But every owner should be alert and knowledgeable enough to recognize when a cat is experiencing distress. And every owner certainly should be wise enough to keep handy the phone number of his or her veterinarian or the nearest veterinary emergency clinic in case such an unpleasant situation should arise.

“Keep the animal as stress-free as possible,” she advises, “and call your veterinarian or the nearest emergency facility for advice on what to do. In some cases, we may recommend just watching the animal overnight and calling us in the morning. In other cases, well urge the owner to get the cat to us as soon as possible.”

One thing that a cat owner should never do, she says, is give a human painkiller or any other type of human medication, for that matter to a suffering animal. “Just one acetaminophen tablet can kill a cat,” Dr. Mayer-Ronne points out. “In most cases, well advise the owner to gently wrap the animal in a soft blanket and bring it over immediately.” v