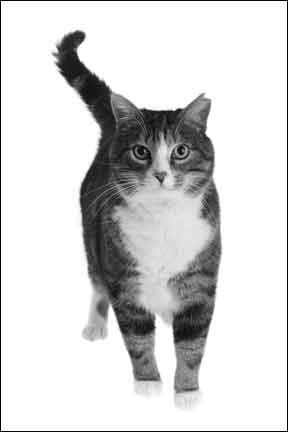 A cat’s tail can wave happily, swish angrily and wrap around him contentedly. But when the tail is injured, more may be at stake than the ability to communicate mood.

Injuries to the feline tail may be minor, causing a brief spasm of pain or a permanent crook, or they may damage the nerves so severely that bladder and sphincter control are affected temporarily or permanently. Common injuries include fractures, acute trauma that may involve damage to the skin or heavy bleeding, and what are known as avulsion injuries, caused by pulling, says board-certified surgeon James A. Flanders, DVM, Associate Professor at Cornell University’s College of Veterinary Medicine. Tails can also be damaged if they are bitten in a fight with another animal.

A cat’s tail can break when accidentally slammed in a door, crunched underfoot or beneath a rocking chair, or run over by a car. Simple fractures, especially those toward the end of the tail, heal on their own and may leave no more evidence of the injury than a crook in the tail. That’s because it’s not possible to splint or put a cast on the tail to hold the bones in place until they heal. The motion of the tail can cause the fracture to heal in an unusual direction. The tail is otherwise fully functional, Dr. Flanders says.

Using Ointment at Home. You can treat minor abrasions or hair loss on the tail at home with antibiotic ointment, but when serious injuries like being mangled in a car engine or other accident leaves the tail scraped and bleeding, a veterinary exam is a must.

With severe damage to the skin, if healing seems prolonged or unlikely, sometimes it’s easier simply to shorten the tail by amputation, which is a simple surgical procedure. Depending on the location of the injury, the cat may lose as little as the last third of the tail or almost the entire tail. Fortunately, despite the tail’s role in communication and balance, cats can get along fine without one.

The most common and potentially most serious type of injury to the tail is an avulsion injury, one caused by pulling. An avulsion injury is often the result of a car accident. “What we think happens is the tail gets caught underneath the tire of a moving car and it pulls the tail,” Dr. Flanders says.

This can damage both the nerves controlling muscles that move the tail — causing it hang straight down like a drooping flag (known as denervation) — and the nerves that control the bladder and the anus. Depending on the extent of the injury, the cat may be unable to urinate and/or defecate on his own.

Nerve function may or may not return with time. Sometimes it can take a month or more before the cat regains control of the bladder or anus. For cats who are fecally incontinent, a veterinary neurologist can perform a test called an electromyogram that can predict with reasonable accuracy whether the muscle tone of the anus will eventually improve. If a cat is unable to urinate on his own, owners must express the urine from the bladder three or four times daily to ensure that the balloon-like organ doesn’t become stretched out.

Outdoor cats run the highest risk of tail injuries, but even indoor cats can suffer a tail break if they land wrong after a fall, for instance. A cat without a tail is unusual, to be sure, Dr. Flanders says, but he’s still a fully functional feline.