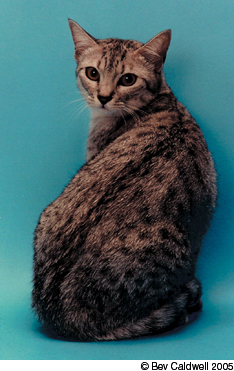 Although the size of cats doesnt vary much, the colors and patterns of their coats form a virtual crazy quilt of designs. The primary progenitors of all that variety are believed to have been two brown/black species of wild tabbies: the African wild cat, Felis lybica, and the European forest cat, Felis silvestris. Cats became domesticated thousands of years ago, and color mutations gradually caused a great number of variations to develop.

Humans may also have influenced the genetic selection process by favoring more unusually colored cats over those with more common markings. I call this phenomenon survival of the cutest, says Lorraine Shelton, co-author of Robinsons Genetics for Cat Breeders and Veterinarians.

Its in the Genes
Your cats coat color is primarily programmed by his genetic makeup, but environmental factors may play a role as well. Microscopic granules of melanin in the hair shaft determine the cats coat color. Eumelanin produces black-based colors (black and brown) while phaemelanin produce red-based colors (red and orange or marmalade). A mutation causing diluted coloring results in gray (blue), cream, lilac or fawn. The makeup of the individual hair shaft creates the pattern of the coat. Random-bred cats can have a wider range of pigment expression, explains Ms. Shelton. And the texture of the coat may affect the manner in which pigment granules are deposited in the individual hairs.

A cats diet can also have an impact on coat color. Studies at the University of California at Davis revealed evidence that inadequate levels of the amino acids tyrosine and phenylalanine may result in sub-optimal pigment expression.

Stars in Stripes
One of the most common pattern types is the tabby. The striping on tabbies is dictated by the dominant agouti gene, the same gene that provided camouflage for our cats wild ancestors. Each hair shaft on a tabby comprises three parts: a gray base, a yellow band and a black tip. Even within this one coat type are four different varieties: mackerel tabbies (commonly called tiger cats), classic tabbies (swirled tabby markings), spotted tabbies (dots of darker color on lighter-colored background) and ticked tabbies (lacking stripes except for the classic M on their foreheads).

Tabbies come in shades and combinations of brown, blue, red, cream and silver. Tabbies bred for show must display breed-specific coat patterns. The classic tabby has a degree of symmetry, with a double row of buttons on its chest and belly and a butterfly pattern between the shoulders, says Carolyn Vella, co-editor of Robinsons Genetics for Cat Breeders and Veterinarians.

Continuous Color
Every cat is genetically programmed for a tabby pattern, but the presence of modifiers or mutations may alter its expression. The recessive non-agouti gene masks the striping of the hair shaft, resulting in a solid coat color. The solid-colored breeds come in six basic colors: black, blue, lilac, chocolate, cinnamon and fawn, says Vella. The intensity of shade of the color can be affected by the recessive dilute gene. This gene reduces red or orange coats to cream, and black coats to gray, a color some breeders refer to as blue.

Selectively breeding for density of color is possible. The jet-black, patent-leather coat of the Bombay is the result of many years of dedicated breeding, says Shelton. But if your black cat is a compulsive washer, the saliva deposits, especially when combined with sunlight, can cause his coat to turn a reddish-brown.

Smoke, one of the most striking coat patterns, is a solid-color coat variously tipped in color and with a white undercoat. From a distance, the coat color may look solid, but when the cat moves or the coat is disturbed, it shows a brilliant white undercoat. This effect is caused by the interaction of the non-agouti gene, the one that masks the tabby pattern, and an inhibitor gene that produces the white undercolor.

Coats of Many Colors
Non-pedigreed as well as pedigreed cats can have coats that are bicolor or tricolor. Among the multicolored cats are tortoiseshells, which have a random patchwork of black and red, and calicos, which have bold patches of red and black with white. Dilute versions of tortoiseshell cats have gray-and-cream coats (called blue-cream), and dilute calicos have areas of gray and cream with white.

Bi- or tricolor coat patterns that have red or cream are the result of the sex-linked orange gene, which is carried only on the X chromosome. All red cats carry the orange gene, says Vella. Because males with a normal chromosome count have only one X chromosome while tortoiseshell and calico traits must be carried on two X chromosomes in order to be expressed, these cats are always female – or almost always.

Approximately one in 3,000 calico and tortoiseshell cats is male, and most of these are sterile. However, some of the chromosomal abnormalities that lead to calico patterns in males do not cause infertility. The Cornell Feline Health Center occasionally receives calls from owners of male calico cats who believe their cats are worth a lot of money. In fact these cats, though rare, are not worth more than any other cat. But because some of these fellows are fertile, we always advise the owners to have them neutered to guard against unwanted pregnancies, says James Richards, DVM, director of the Cornell Feline Health Center.

Whats the Point?
Cats with darker faces, paws and tails and lighter-shaded bodies of uniform color are called pointed cats or colorpoints. Pointed breeds include Siamese, Himalayans, Tonkinese and Birmans, but even random-bred, non-pedigreed cats may come in pointed patterns. Pointed coat patterns come in many colors depending on the standard for a particular breed. The most common are seal (dark brown points and light brown body), blue (gray points and light gray or beige body) and flame (red points on a cream body).

In pointed cats, color is produced only on areas of the body where the skin temperature is relatively cool. Little color expression occurs on the main part of the body, where the skin is warmer. The ear tips, face, tail and legs are cooler, so color is expressed there, giving the pointed pattern. Pointed cats living in cooler climates or cooler homes tend to have darker bodies than those in warm climates. Pointed cats also darken as the circulation to the skin decreases due to age.

The Absence of Color
The presence of the dominant white gene causes a completely white coat. Dominant white hides all other pigmentation and may cause one or both eyes to be blue. (A cat with two different-colored eyes is said to be odd-eyed.) White cats that carry two copies of the dominant gene produce white kittens, but white cats that carry only one copy of the dominant gene may instead pass the recessive version of the gene to some of their offspring, producing kittens with the underlying colors and patterns visible. Some all-white cats are also deaf in one or both ears, while others have normal hearing.

Another genetic trait, the white spotting factor, results in a piebald-patterned, partially white coat known in breeder parlance as with white. For example, a buff-colored tabby with white patches is called a cream tabby with white. A tortoiseshell with white is called a calico. A with white cat may have only white feet or a white belly or be almost completely white with only small patches of color.

Cats carrying the white spotting factor can have blue eyes or odd eyes as well.

Although blue eyes have occurred in white spotted cats, deafness appears to be a phenomenon limited to all-white cats, says Shelton.

The presence of a recessive gene for albinism can result in white cats with pale blue eyes but is not associated with deafness.

Although there is no gene for companionship, your cat is completely capable of providing it – no matter what the color of his coat is.