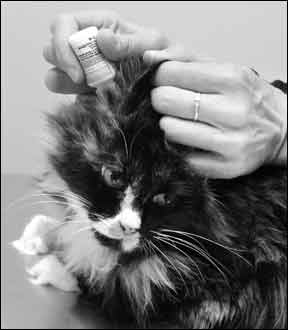 Among all acquired feline ear disorders, the most common by far is otitis externa, an infection of the outer ear canal that, if left untreated, can progress to the inner ear, damage the ear drum and seriously compromise an animal’s hearing as well as its sense of balance. The most common cause of this unpleasant condition and its potentially deafening consequences is an assault on the ear by an outside invader, the ear mite. In some cases, however, the culprit is an organism that normally resides harmlessly within a cat’s ear — a one-celled fungus, or yeast, known as Malessezia.

“All feline ears have Malassezia in them,” explains William Miller, VMD, a board-certified veterinary dermatologist and medical director at Cornell University’s College of Veterinary Medicine. “It’s just part of the natural flora. But if something changes the climate in the ear, the organisms begin to multiply and become too numerous — and you end up with infection.”

Contributing Factors. Several factors can precipitate the proliferation of Malessezia, which tends to live in a warm, damp environment, Dr. Miller points out. An allergic disease of some sort, for example, can make the surface of the ear canal abnormally moist and thus foster yeast growth. The excessive accumulation of wax in the canal may also be responsible, since yeast organisms feed on that gooey substance. A cat that likes to go swimming would be at greater risk, of course, but this would be an extremely rare cause of yeast growth, since, as Dr. Miller dryly observes, “Most cats, unlike dogs, fail to take pleasure in swimming.”

Among all causes, he observes, the most typical is the prolonged and inappropriately routine use of liquid ear cleaners by overzealous owners who are unaware that the constant lubrication of an animal’s ear canals is bound to be counterproductive. Says Dr. Miller, “Some owners just can’t keep themselves from futzing around with their cats’ ears.” (See sidebar on this page.) All cats are susceptible to Malessezia proliferation in their ears, he notes, although animals living in warm, humid climates are at greater risk.

Clear Indications. The signs of what Dr. Miller refers to as “yeast otitis” are the same as those associated with otitis externa in general: The cat’s outer ear is likely to be inflamed, and the animal will hold its ears flat back against its head, scratch at them incessantly and shake its head frequently — as if trying to dislodge a bothersome object. The cat may walk unsteadily, behave in an uncharacteristically lethargic manner and respond as if in pain if its ears are touched.

Otitis externa caused by various other infections can potentially spread to the middle ear, eardrum and inner ear and cause deafness. However, Malessezia is eminently treatable, Dr. Miller says, noting that he has never seen a yeast infection that progressed beyond the outer ear, even though the natural flora in a cat’s ears normally thrive as far as the ear drum and even beyond. “The yeast can cause irritation in the ear canal,” he says, “and there can be a lot of debris and goo in there that can affect a cat’s ability to hear; but a yeast infection will rarely cause permanent deafness.”

Relieving the Blockage. Diagnosis will usually entail a review of an animal’s medical history and a thorough physical examination, with special attention given to the affected ear or ears. For this, the veterinarian is likely to use an otoscope — a flashlight-like instrument that provides a magnified view of the ear’s inner depths.

Also, says Dr. Miller, “We’ll clean out the ear and use a microscope to examine a sample of the debris in the ear canal — and with Malessezia infection, there will be lots of it. If we determine that a yeast overgrowth and nothing more is the problem, we’ll institute antiyeast therapy — eardrops or pills. The clinical signs will usually disappear entirely within two to four weeks. If they don’t, we’ll try to find out what other ear condition is causing the problem.”

Dr. Miller strongly cautions owners against trying to relieve a cat’s ear problems on their own. If the signs of a hearing disorder in an animal become apparent, it’s important to seek veterinary consultation, he advises.