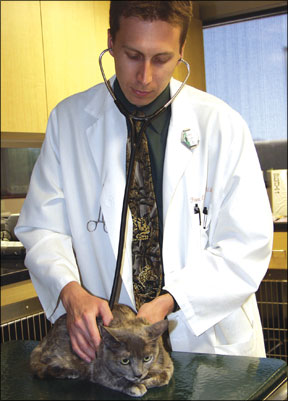 Q: Dear Elizabeth: We adopted a new kitten from a local rescue group last month and she is just perfect. Although she had been tested for the leukemia virus and FIV by the terrific group that saved her from the street, we took her to our veterinarian right away so that she could be examined before we introduced her to our two older cats. After a clean bill of health, we brought Bunny home and she has become part of the family. The problem is that before we scheduled her spay surgery, she came into heat. What a scene!

We woke up to the most unusual meowing I have ever heard and found Bunny in a state: She was rolling around on the floor, yowling and seemed for all the world to be in pain. We rushed to our veterinarian fearing the worst for our new girl. After talking to

us about our observations, and doing an examination, our veterinarian diagnosed … puberty! I had no idea that a cat in heat could behave in such a dramatic fashion; now I know what caterwauling is.

Our veterinarian suggested that we wait for the heat to finish before having Bunnys spay surgery, which were happy to do. Our concern is that were noticing an enlargement of her mammary glands. At first we presumed that the enlargement was simply due to the hormonal changes of her heat, but her mammary glands are continuing to get bigger. They are actually kind of hard to the touch and seem to be bothering Bunny a bit. Is this a normal part of the heat cycle for a young cat? I think we should go back to our veterinarian again, but wondered if you could give us some advice in the meantime.

A: Congratulations, my friends, on taking a cat in need into your hearts and your home. Bunny is a lucky girl to have landed with you! I agree: You should take Bunny back to your veterinarian to have her mammary glands examined. There is a list of possible causes for lumps and bumps associated with the breasts; it will take an examination, along with a history from you, to help sort out Bunnys problem. In addition, your veterinarian may recommend further testing such as cytology or biopsy to reach a definitive diagnosis for your girl.

From my privileged desk-top position as the FHC Spokescat, Id be willing to bet my favorite catnip toy that Bunny has a condition called mammary hypertrophy/hyperplasia syndrome. The cause has not been entirely worked out, but it is thought to be an abnormal or excessive response to progesterone. It is seen most often in young, unspayed female cats who have recently been in heat, but occasionally occurs in cats after spay surgery. Another category of affected cats are males and females who have been treated with progesterone hormones. The syndrome is characterized by rapid, firm enlargement of one or many mammary glands. Initially, there is little apparent discomfort, but as the mammary glands grow they can become painful, possibly due to stretching of the overlying skin.

If Im correct about Bunnys diagnosis, the treatment for her will be ovariohysterectomy (spay) surgery to remove her source of progesterone. Even so, it may take several weeks for her mammary glands to regress. If her glands have gotten so large that they interfere with the usual incision site for spay surgery, your veterinarian may suggest a flank approach. Alternatively, he or she may discuss medical therapy aimed at reducing the size of her glands in preparation for surgery. Aglepristone is an anti-progesterone drug that is very successful in shrinking mammary tissue, but it is not available in North America. While not as efficacious as aglepristone, an option for U.S. veterinarians is the anti-prolactin drug, cabergoline.

I am a betting cat, and wager that your healthy, young, intact, cycling cat has mammary hypertrophy/hyperplasia, but do make that appointment to be careful! Your veterinarian will want to rule out infection and neoplasia – two of the other possible causes of mammary gland enlargement. Love, Elizabeth