Dear Elizabeth: I adopted a cat from a local animal shelter three years ago. She is a beautiful brown tabby girl who loves to help when Im working at my desk. The trouble is that she sneezes green goobers all over my paperwork.

When I brought her home she had a runny nose and goopy eyes with a lot of sneezing – a classic cat cold according to my veterinarian. A week of antibiotics helped decrease the wet sneezes, but Tabitha has never really recovered from that early cold. Three years have gone by and she still sneezes thick goobers nearly every day. Although she seems happy, is active and eats well, her constant snuffling, congested breathing and spewing green goobers breaks my heart – and also has me frustrated. My veterinarian has done everything she can think of, from antibiotics for weeks on end to medication to help with Tabithas immune system. Everything seems to help … for a while. What tests can I ask for to find out exactly whats causing Tabithas sneezing?

First of all, congratulations on adopting a cat in need; Tabitha is one lucky tabby. I can hear the frustration in your letter about Tabithas snuffling. I have heard that term before: “Chronic snufflers” are cats who have audible breath sounds emanating from their upper airways. They have nasal discharge that sometimes is clear but more commonly is cloudy and thick. Sneezing is a sporadic but reliable sign of the snuffler; affected cats often suffer daily bouts of sneezing with ejection of mucus from one or both nostrils. Humans who live with chronic snufflers become expert at cleaning nose-high walls and furniture.

The more medically correct term for Tabithas condition is “chronic rhinosinusitis” and the list of underlying causes is long. Possibilities include nasal foreign body (such as a blade of grass), fungal infection of the nasal cavity and abnormal tissue growths (such as inflammatory polyps or neoplasms). Many snufflers have chronic destructive rhinitis due to early viral infection. In these cats, there is disruption of the normal delicate architecture inside the nasal cavity, and often increased numbers of mucus-producing cells; both changes make the nasal cavity a perfect location for bacteria to live and grow. Proximity of the tooth roots to the nasal cavity means that even dental disease can result in rhinosinusitis.

These disparate possibilities mean that a cat with chronic rhinosinusitis (a snuffler) deserves a thorough diagnostic work-up to try and pinpoint the underlying problem. Not surprisingly, veterinarians are most successful treating cases of chronic sinusitis when they know exactly what they are treating!

What is a typical diagnostic work-up for a snuffler? My sources here at Cornell tell me that a cat like Tabitha would have a series of diagnostic tests and procedures.

First steps would include performing a baseline set of blood and urine tests to evaluate general health, along with tests to rule out those two nasty viruses, feline leukemia virus (FeLV) and feline immunodeficiency virus (FIV). If the lab tests all turned out well, next steps would involve getting a good look at the structure of the nose and upper respiratory tract.

X-rays of the skull taken under anesthesia are still the most common method of getting an image of nasal structures and other skull features; however, at most large veterinary institutions (like my favorite, Cornell!), Computed Tomography (the CT scan) is fast taking over. CT scans are able to provide improved detail of nasal and skull features, but either imaging technique can provide important clues about the cause of snuffling.

Although clues obtained from X-rays or CT scans are often able to help localize the area of abnormality in a snuffling cat, more information is often needed to make a definitive diagnosis. In these cases, direct visualization of the nasal cavity, pharynx and larynx can be done under anesthesia with instruments such as a fiberoptic endoscope.

So, for Tabitha, our advice would be to evaluate her general health (physical exam and lab tests), look for diagnostic clues and localize the problem (X-rays or CT), and then have a direct look at the affected area. A final step might be a culture and biopsy of abnormal-looking tissue with the help of an endoscope. I hope this helps you and Tabitha. Love, Elizabeth

Foster Care: Are You a Candidate? 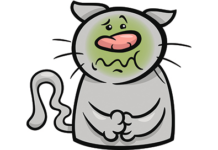