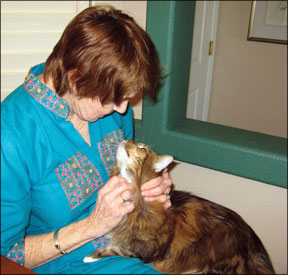 Dear Elizabeth, What is MRSA? My doctor says that a wound on my hand has an MRSA infection. Could my cat, Streets, have given it to me? He is an indoor cat and seems healthy, but could he be a carrier?

Wow! This calico had to ask for help with your questions! Although I have picked up quite a lot in my role as Official Spokes-cat for the Cornell Feline Health Center, MRSA was new to me. Before giving you all the information I got, Ill give you the short answer to your questions:

MRSA colonization and infection can occur in cats, and transmission across species is possible. Therefore, it is POSSIBLE that your MRSA came from your cat. However, chances are MUCH greater that you were exposed to the bacteria somewhere in the community. In fact, most experts would worry that you could be a source of infection for Streets! Heres the whole story.

Staphylococcus aureus bacteria are everywhere, and they usually live with and on humans without causing illness. At any given time, about 20 percent of people have S. aureus living on their skin and in their noses. These colonized people are unaware of their freeloading population of bacteria and are a potential source of spread. Contagion is prevented by the use of good hygiene – particularly hand-washing!

On occasion, S. aureus can cause problems ranging from a simple skin infection,

such as impetigo, to life-threatening systemic illness. Minor infections are very common in people and easily treated. Serious staph infections are less common but can occur in individuals with reduced immune function due to age, injury or other illness. Historically, antibiotics in the penicillin family have been most effective at clearing staph infections.

MRSA is a particular strain of S. aureus that has developed resistance to penicillin and related antibiotics. These so-called methicillin-resistant Staphylococcus aureus (MRSA) bacteria have acquired the mecA gene, which encodes for a protein that reduces the ability of penicillin-type drugs to bind to the bacteria and thereby allows the bugs to survive antibacterial therapy. In addition to being resistant to the penicillin family, MRSA bacteria often possess genes that give them resistance to other antibiotics as well, severely limiting treatment options. As is true for all staph germs, MRSA can also colonize an individual without causing illness.

MRSA infection was first recognized over 40 years ago in hospitalized human patients. Incidence has been increasing over time, with MRSA infection now considered to be a significant risk in healthcare facilities like hospitals and nursing homes, where bacteria are often spread to patients on healthcare workers hands. MRSA is being diagnosed more frequently as a “community-acquired” infection as well, affecting individuals in daycare facilities, health clubs and other facilities that bring large numbers of people into close contact.

Dogs and the higher species – by which I mean cats, of course – can be affected by both S. aureus and MRSA in much the same way as humans. As in people, exposure to MRSA is most likely to result in colonization. Colonized animals show no symptoms, and most clear their bacterial population within several weeks unless they are reinfected. The unlucky animals that become infected at the time of MRSA exposure require veterinary care to clear their infections. Weak, debilitated or immunosuppressed animals are most likely to suffer infection with MRSA.

The bottom line for you and Streets is this: Researchers and infection experts would not recommend that you test or treat Streets as long as he stays well. Their advice would be to keep your wound covered, wash your hands frequently, limit contact with your boy and take your medicine. Good luck, and give my regards to Streets. Love, Elizabeth