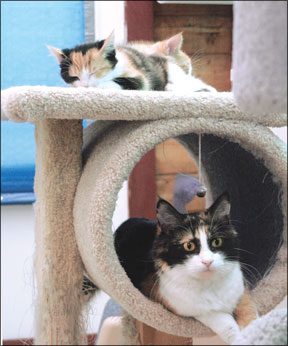 Once upon a time, cats were considered to be solitary creatures. Since they hunted alone rather than in packs, it was assumed that they preferred to be alone. As it turns out, some cats do indeed avoid the company of others. Yet even more cats clearly choose to remain close to fellow felines. They snuggle and groom and

maintain proximity even when there are plenty of comfortable, safe resting places nearby.

Unfortunately, there is no reliable way to predict whether an individual kitten will mature into a cat that seeks rather than shuns companionship. When two kittens are adopted together, particularly when they are siblings, the expectation is that they will benefit from one another. Initially, most kittens do play together, groom one another and share a bed. Even as their second birthday passes, all may seem well.

Then, somewhere around year number three, there is a change. Instead of playing, there is hissing. Fur flies about. Stool might appear outside the litter boxes, or there may be urine spots on the walls. This evidence of trouble might seem to appear for no apparent reason at all.

Actually, there is almost certainly a good reason. Consider that cats mature socially somewhere between two and three years of age. Personality traits are now consistently evident. The immature cats that enjoyed or at least tolerated one another may no longer prefer to be near their former mates.

If space were unlimited, a cats response to a personality mismatch would be to move ahead to another location. Housecats do not have this option. Sometimes, even a very large house is still not large enough.

Cats living in homes do have some choices when they are no longer compatible.

(1) The cats may begin to engage in physical fights.

(2) They may avoid one another by sleeping in separate areas, eating at different times and using the litter box when no one is nearby. Problems occur when one of the cats is fearful and will not move through any open space to reach food or a litter box. At best, waste may be deposited in places that are not central. At worst, food-deprivation can create serious health consequences.

(3) The cats may communicate their displeasure. At best, they may vocalize. At worst, they may send their messages through marking. Drops of urine may be discovered on vertical surfaces in socially significant areas of the house.

Is There a Solution?

Oftentimes, yes. Early identification of a pending problem is critical. Hissing and growling should not be taken lightly. When a favored resting place is suddenly abandoned, watch for evidence of subtle postural threats.

Whenever there is a behavioral change, the first step is always to have the cat examined for a physical problem. Pain, urinary infection and systemic diseases could be responsible for any of the aforementioned behavior changes.

Once the cats are both deemed healthy, the relationship can be addressed from a behavioral standpoint. Examine the relationship as a unit – consider that problem behavior is generally not created and maintained by one cat but by the dynamics of interactions. If a cat successfully blocks another cat from passing, and the victim in turn leaves an increasingly wide berth, then the more assertive cat will be reinforced and the behavior will continue.

Although a cats personality may not change, the tendency to be aggressive or fearful in particular situations may be modified. For example, safe passage can be provided by consistently using a treat or toy to distract an aggressive cat. Remember, cats are subtle. Stares and body blocks are given and taken seriously. Therefore, the intervention should be done before any prolonged staring. That is, before the victim needs to pause or retreat. Once a cat growls or hisses or runs away in fear, it may be too late.

Maturing cats may be more likely to maintain good relationships if they are free to control the space between each other. Offer many resting places that allow cats to select both horizontal and vertical distance. Cat trees, shelves and other perches should be available. Be sure to provide several feeding stations. Offer a litter box on each level of the house, with at least three boxes for a pair of cats.

Watch your cats closely as they mature. Keep watching as they pass their second and even third birthday. They may drift apart, finding their own niches. That can be just fine, even if the niches are under the same roof.