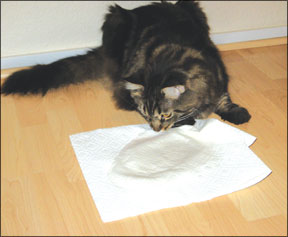 Everyone wants to feel good about his cat, right? Yet all too often, a client will enter the consultation room, greet me and quickly announce that his cat is “bad.” As a stranger to both the cat and his person, I must take a deep breath prior to asking, delicately, just what this cat has done to earn such a label. Oddly enough, the crime is nearly always the same – the cat eliminates outside his litter box.

Why the label? Unsympathetic ears abound. Friends and relatives may claim that they have never lived with a cat that voided

outside a litter box. They may state that this type of behavior should not be tolerated and that no “good” cat would do such a thing.

Some professionals in the animal field are not familiar with the many reasons why a cat might exhibit inappropriate elimination. It is true that most housecats do manage to use litter boxes most of the time. The myth is that when a cat refrains from using his box he is abnormal.

In fact, there are many reasons why a behaviorally normal cat might decline to use a litter box. Lets say a cat lives with a five-year-old child whose favorite pastime is to chase the cat. The litter box has been conveniently placed in a utility room just beyond the playroom. The cat, not a fan of the kid-and-the-cat game, no longer passes through the playroom when the child is nearby. Instead, when the urge to eliminate can no longer be suppressed, this clever cat marches the other way in search of the most suitable alternative. Hence, he discovers a carpeted corner of a quiet room. Is this cat normal?

A similar situation could arise should a cat encounter an aggressive dog on his way to the box. And surely a cat that has been ambushed when leaving his box will not want to fall into that trap again. Is that cat normal? These situations, in which triggers can be identified, are nearly always manageable. The problem elimination is likely to resolve with appropriate intervention. No bad cat.

Sometimes there really is an underlying behavioral abnormality. Cats may suffer from anxiety or aggression, both of which, when properly diagnosed, are amenable to treatment. Even behavioral illness does not mean that a cat is bad.

What happens when a behavioral treatment plan fails? Unfortunately, it is tempting to diagnose a condition as being primarily behavioral in nature without considering the possibility of an underlying medical condition.

A Physical Exam Is Needed

When a faithful litter box user begins to soil outside his litter box, he deserves a thorough medical workup. Only after medical conditions have been excluded can a primary behavioral diagnosis be assigned.What sort of medical workup is reasonable? The behavioral signs that you report to your veterinarian will be used to guide the direction it takes.

One of the first conditions to consider when a cat urinates or defecates outside his litter box is infection or inflammation of the urinary tract or GI tract, respectively. Concurrent clinical findings will support the likelihood of pathology in these organ systems.

Some disease processes result in a change in the odor or concentration of urine or stool. Offensive odors or large quantities of urine or feces can decrease the attractiveness of a litter box.

Not to be overlooked is the effect that pain can have on litter box habits. Pain in the limbs or back may discourage a cat from climbing into a box or from climbing a flight of stairs to reach his box. Similarly, pain may prohibit a cat from flexing enough to position himself within the confines of a box.

A cat suffering from injury, infection or inflammation on the foot may also choose to boycott his litter box. Granules of litter may cling to sore areas, exacerbating discomfort and encouraging a cat to seek an alternative surface for voiding.

There are many other medical conditions that could contribute to a cats house-soiling. Neurological disease can make access to a box physically difficult and can contribute to confusion regarding the purpose of the box. In addition to a medical workup based on a detailed description of the behavior, a veterinarian might also request a behavior consultation. A physical disease might be cured or controlled, yet the behavioral consequences of that condition might linger.

Whether a cat suffers from a primary medical problem, a primary behavioral problem or a combination of the two, he is not “bad.” He just needs some help.