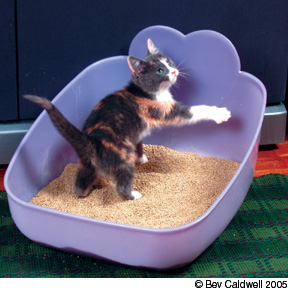 Cats are capable of an amazing assortment of behaviors. Some behaviors that are normal for cats are socially unacceptable to humans. A particularly common but universally unacceptable behavior is elimination outside the litter box.

When a cat soils in places other than his box, it is time to call the veterinarian. Once the cat is determined to be healthy and all reasonable medical explanations have been ruled out, it is time to consider other factors.

Some cats eliminate outside their boxes in order to mark their environments. Marking may occur in response to social stress within the home. Alternatively, the cat may mark in order to send a message to outside cats, namely This residence is not available to you.

But healthy cats usually eliminate outside the box simply because they are not satisfied with the box itself. There may be a complaint about the cleanliness of the box, its contents or even its location.

These tests must be done systematically, and the cat must be given ample time to respond to each of them. What are some of the important factors we need to determine? At the very least, we should learn what type of litter the cat likes best, what depth of litter is ideal and what style and size of box is preferred. Other questions may arise later in the experiment.

To begin a litter box preference test, litter boxes are placed side-by-side in a single location. If there is enough space in the room, you can offer a variety of options simultaneously. That is, several sizes and types of boxes may be presented along with several litter types and depths.

Most homes do not have a large room that can be dedicated to a whole line of litter boxes, but the test can also be performed with just two boxes. Place them side-by-side, and vary one feature at a time. (All results should be recorded in a behavioral diary.) Since each test may last for five to 10 days, it may be several weeks before a pattern is determined.

The order of testing is not crucial. However, the behavioral history may point to a sequence that is likely to yield the most information in the least amount of time. For instance, for the cat that likes to eliminate out in the open, the type of litter box may be more important than the litter used to fill it. Cats that prefer to eliminate on soft rugs, on the other hand, may be fussy about the type of litter.

As an example of a typical test, lets begin with a test for litter preference. Two identical boxes are placed side-by-side. One box contains scoopable unscented litter, the other scented. If there appears to be no clear preference, then the following week scoopable unscented might be tested alongside standard clay unscented. Pairs of litters should be offered until there is a clear preference for one type of litter. There are many litter types on the market, so it is important to continue shopping until a preference has been determined.

Once the cat has selected a litter type, test for a depth preference. The two boxes should remain side-by-side with the same litter. One box should be filled with about three inches of litter, the second with about one inch.

Once you have determined the cats favorite litter type and depth, it is time to determine whether there is a preference for an open or closed box. Place the selected litter at the appropriate depth into two boxes, again side-by-side, but this time one box should be open and the other hooded.

You are now able to offer your cat an appealing box. Keep it clean and accessible, and both you and your cat are likely to be satisfied with his litter box habits.