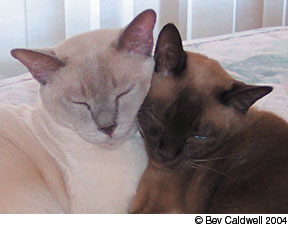 Nearly every week, I hear a cat lover lament, I think my cat is lonely. Should I get her a pal? Well, I would have to say that there is simply no simple answer to that question, except to say that it depends!

It certainly makes sense that a cat would naturally want to spend time with its own kind. When cats live on their own, without steady access to humans, they routinely form social groups. Within those groups, certain cats seem naturally to spend quite a bit of time on their own, while others are frequently seen in the company of other cats. Still other cats appear to have no regular feline companions.

Does a cat spend time alone because he simply does not like cats? Or has he just not met the right cat? And more importantly, how can one tell whether a cat longs for feline company?

Before considering what an individual cat would prefer, it is essential to consider what the people of the household want and need. Cats need personal time with their people, including individual play time, snuggle time and grooming. A new cat may have certain medical conditions or behavioral problems that will demand extra time and energy costs, all of which should be considered before the adoption.

Assuming that you are ready and eager for a new cat, how do you determine the likelihood that your cat will tolerate a feline housemate? There are several behavioral traits that warrant closer consideration,  but remember: Just because your cat exhibits one of these traits does not mean that you can never add a second cat to your family. It does mean that you may need to consult with a veterinarian prior to and shortly after the adoption to be sure that the introduction goes as smoothly as possible for all parties.

A Warning Sign to Heed
The first note of caution pertains to cats that are extremely fearful, particularly in social situations. If your cat continually runs away from a newcomer, then the new cat is likely to be stimulated to chase. It may be an entirely playful chase, but it is quite possible that the chase/flee cycle might escalate to aggression, with one cat spending all of his time in hiding while the other is in hot pursuit.

The cat that is aggressively pushy may pose a problem for a newcomer. I am referring to the cat that behaves aggressively when asked to move aside on the sofa or when she is lifted from the counter. The cat that bites you when you attempt to pet her or reach for her food bowl may not play nicely with others.

Finally, consider just how much your cat is attached to you. Does she threaten people who attempt to touch you or sit beside you? If so, she may be reluctant to share you at all.

If your cat is relatively fearless, not particularly aggressive and allows you some freedom of your own  then you may proceed as though all is in your favor. Your cat may tolerate or better still, actually like another cat.

The next step in the process is that of cat matching. It may be difficult to say what your cat would look for in another cat. It does not appear to be as simple as matching interests or even activity levels. Instead of searching for common threads, consider the personality of the newcomer by applying the same guidelines used to evaluate the resident cat. That is, does the cat or kitten under consideration appear fearful? Does he startle readily and try to hide? Or is he friendly and interested in interacting with you and your family members? A fearful cat may become a victim as soon as he enters your house – not the best way to start a new family.

Next, be sure that the new cat does not behave aggressively when you pet him, hold him or lift him. It would be best to select a cat that is relaxed and tolerant of your manipulations. A cat that is overly offensive or defensive may demonstrate aggressive behavior during interactions with your first cat.

The ultimate factor that will determine the success of the adoption  – for better or worse – is basic compatibility. As in any relationship, quite simply, the cats have to like one another.