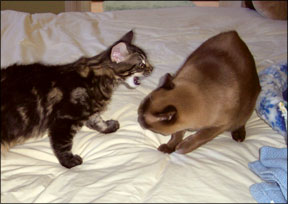 Who doesnt love a kitten? They’re so soft when we just need something to touch. They’re so funny to watch after a hard day at the office. They’re so easy to entertain when we want to relax.

Whenever we adopt a kitten, we can expect to be the recipients of small “mistakes.” There may be an attention-seeking swat that tears our pantyhose. Or a scratch when the toy moves out of reach faster than our arm does. Maybe even a nip when we attempt to

play cat and mouse using our hands as the target.

Sometimes, we encounter a kitten that seems to inflict injury on a regular basis. Is this normal? Not necessarily, but it does occur. Why? All behavior is a product of genetic influence and environment. Genetically, some cats are predisposed to behave more aggressively than others.

As for the environmental influence, the fact is that most kittens leave their cat families at a very early age – so early that they have not finished learning some necessary social skills. When kittens are hand-raised as orphans, the opportunity to learn appropriate skills decreases even further. Kittens raised with a cat family are taught to control biting, control batting and control aggressive posturing. Kittens do not want to drive away their littermates.

What can we do with the kitten that literally makes us bleed? First, we must try to determine the kittens underlying motivation. Many kittens are clearly attempting to play but are just doing so in an inappropriate manner. The injuries they inflict are truly accidental. These kittens may squat and pounce as people walk by. Or, as they race through the room playing with their invisible friends, they may use their real friends as springboards. Ouch.

Try videorecording your kitten. Keep yourself safe – dont set up a situation that will surely cause you harm. Then, watch the film or better still, have a behaviorist watch it with you. You will probably be able to identify play-based postures: ambivalent positioning of body parts, rapid changes in posture, and relatively immediate cessation of aggression when a new game becomes available.

The inappropriately playful kitten has a good chance of growing up into a normal cat. Treatment may be as simple as keeping the intensity of interactive play to a low level. And, by expecting the unexpected, you may be able to consistently distract your kitten during high-risk times. Be ready to distract before the pounces occurs by tossing a handful of balls before you walk past the stalker. Set up a playroom – a safe place with carpeted climbing areas – so that your kitten can fly about without landing on a person.

When the bites inflicted during interactive play are routinely severe, this may not be true play behavior. Equally troubling are bites that occur when a kitten is being gently petted or lightly held, or in response to attempts to move him physically.

There are several concerns about young kittens that bite seriously. First, as they mature into cats, they may still be unable to appreciate the intensity with which they bite. A light “dont pet me” bite may be a hard chomp. A kitten that is easily stimulated to bite during play may continue to be easily aroused as an adult. Of course, these behaviors can be addressed in the adult cat. But they are serious and potentially dangerous behaviors that must not be taken lightly when observed in a kitten. That is, do not expect that they will simply disappear when the kitten becomes a cat. In fact, quite the contrary, aggression often increases as cats mature socially.

Treating the seriously aggressive kitten can be challenging. Confrontational techniques that increase fear may secondarily increase aggression. A safer approach is to try to identify the triggers that incite your kitten to bite. Anticipate these situations and be prepared to reduce your kittens arousal level. When in a bind, use a distraction. One long-term approach is to teach the kitten some basic commands. Teach him to move ahead of you, to sit for you and even to roll over. Reward him with treats. Once your kitten has been trained, you can defuse a potentially dangerous situation by asking him to follow a command. If he is properly conditioned, he should think “treat” – instead of choosing to bite.

It is possible that you will see an increase in aggression despite your treatment efforts. On the other hand, if you are able to teach your cat to attend to you with the expectation of a reward rather than a fight, you may be able to remain safe.