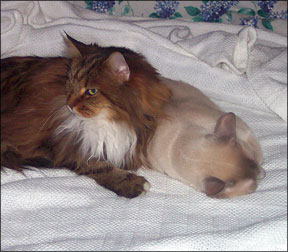 What is your first thought when you come home from work to discover that something in your house has been damaged perhaps by one of your cats? You may wonder, “Who created this mess?”

Dog owners will often assign blame based on a dogs allegedly guilty expression. Cats, on the other hand, never found a place for that expression in their repertoire. Instead, they share in our wonder when we discover that something is amiss. Of course, if we begin a habit of returning home, discovering the damage and then shouting or running about the house, flailing our arms in despair, then even a guilt-free cat will learn to run. A cat will even learn to hide when we return home, anticipating that the riot may begin at any moment.

It may not be healthy to look for a way to place blame. On the other hand, most people grow increasingly frustrated by having their property damaged. Sometimes, the damage is caused by a normal behavior that has not been appropriately redirected. (For instance, a cat that has not learned to favor a scratching post may easily destroy a favorite chair with her claws.)

Urine marking is also a very normal behavior that is routinely observed in outdoor cats. A perfectly healthy and confident cat may mark as a reminder that she is a cat. And it is not abnormal for a cat to prefer a litter-box substrate other than ordinary litter.

However, in many cases, urinating outside the litter box may actually reflect an underlying pathology or a behaviorial issue. Cats with any one of the diseases that affect the process of urination or the production of urine may begin to urinate in unacceptable areas. A cat that experiences neurological dysfunction or musculoskeletal pain may also boycott her litter box.

But cats that are very fearful or are victims of aggression may deposit urine in order to comfort themselves, or because they cannot safely access a litter box. Some cats do not tolerate being left alone and need treatment to reduce their anxiety. For any of these cats, the unacceptable urination represents a primary behavioral problem.

We really dont want to “blame” these cats. Still, given all of the reasons why a cat might urinate in an unacceptable area, it is absolutely necessary to learn which cat or cats are engaging in the behavior in order to know which animal(s) need our help.

So how does one learn which cat is responsible? It is tempting to make guesses based on the personalities of the cats in the home. Perhaps one cat is nervous, or aggressive. Or perhaps one cat was slow to train to the box. Maybe one cat has even been caught in the act. I am often called to consult in cases where no cat has ever been caught. I might be asked to determine which cat it could be, and as a behaviorist I suppose I am entitled to make an educated guess. But it would still be just that a guess.

In fact, the only way to know which cat is responsible for a behavior is to catch the cat engaging in the behavior. In the past, cats have been fed a fluoroscein dye that can cause urine to fluoresce. However, this technique is not always reliable.

Instead, video monitoring, which is easy yet expensive, has become the gold standard for determining which cat actually needs behavioral therapy. When there are many cats, the entire situation must be assessed. Sometimes, there is more than one behavioral diagnosis. In some households, urine marking may not be the only explanation for urination outside the box. One cat may engage in marking while another simply does not like his litter box, or one cat may exhibit both behaviors.

I urge you not to condemn one cat just because that cat happened to be unlucky enough to be caught. Learn the pattern, confirm the diagnosis and treat each cat accordingly. Most inappropriate urination and marking problems can be treated successfully.

By treating only one cat based on a hunch, the problem will only be partly solved. The outcome may be very poor, simply because there is another cat in the home that is engaging in this similar behavior for a very different reason.