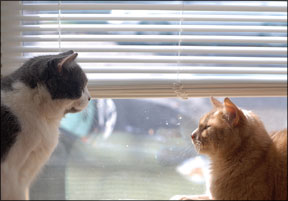 Lets be honest: Anyone can have a bad day. Maybe the car wouldnt start. Or you forgot to set the alarm and were late for an important meeting. You might have snapped at a loved one who asked a simple question.

As your day improves, you will probably get back on track. The victim of your ill humor – understanding that your behavior was nothing personal – will still treat you kindly.

If only our cats could be as understanding. Sadly, a hiss, growl or swat from a trusted feline companion may set off a cycle of aggressive behavior that can take weeks, months or even years to resolve. Sometimes, an inciting event can clearly be identified. Often, folks come home to find that their cats seem to be at war.

When bombarded with an unidentified scary sound, a cat may believe that she is under attack. Perhaps your painter needed to power-wash the deck. Maybe something triggered your neighbors alarm system. Nellie, a nervous kitty, could take refuge in the closet.

Or, she may instead attempt to learn the source of the scare. She will take a mental snapshot of the scene. Anything in the picture becomes suspect. Her housemate, Sue, seems a likely culprit. Frightened cats are not reasonable, and fear is a powerful trigger for aggression. Without taking time to recall that Sue has always been a friendly companion, Nellie initiates an attack. Naturally, Sue will be caught off guard. She could fight back, or will probably head for cover.

A more challenging problem will arise when the cats encounter one another for the second time. Nellie – convinced that Sue caused her fright – may growl, hiss or even initiate a chase when Sue reappears. Sue, recalling her recent attack, might hiss when she sees Nellie. The cycle will begin again. Both cats are now exhibiting fear-based aggression.

A New Cat in Town

Another common trigger for fighting can be a neighborhood cat browsing in your yard. Imagine that Nellie and Sue are on the sofa, basking in the sun. Nellie spies this cat through the sliding door. She lunges fiercely at the glass, but cannot get to the scary stranger. Instead, she turns to attack Sue.

This unexpected, redirected aggression will of course frighten Sue. As described in the prior scenario, the cats may continue to hiss, growl, and fear one another long after the outside cat has disappeared from view.

Sometimes, months of disharmony can be triggered by something as simple as a visit to the veterinarian. In this case, lets imagine that you and Sue have just returned home. When Nellie comes to greet Sue, instead of the usual chirp, you get a hiss. Startled, Sue runs off. Here we go again. Two frightened felines.

The first thing you need to do is separate the cats. Play it safe. Give them at least three days off from one other. Give each cat a chance to relax, and maybe even forget the experience. Treat the cats as though they were being introduced for the first time. Sometimes, a little patience at the outset can prevent the need for months of therapy.

During the separation period, let the cats explore the house one at a time, then bring them back to safety. As they wander about, each cat will probably leave some comforting facial marks in special locations. Try to scatter some new, interesting toys throughout the house. Add feeding stations, and consider an extra litter box for convenient access. After the break, begin the trial reintroduction. Use a screen or gate for safety. Confirm that the cats appear friendly before removing the barrier.

Unfortunately, if the trial meeting is not friendly, you will need to again separate the cats. Now, a steady, systematic process of reintroducing the cats to one another must be followed. It is very important that this introduction be done slowly. Otherwise, instead of relaxing, the cats could become more frightened.

An Ounce of Prevention

Although one cannot anticipate all potential triggers of a fear reaction, there are some preventative measures to take. If your cats are sensitive, then separate them, or bring them to visit a friend, before a loud construction project begins. Try to block your cats view of roaming cats. When one cat returns from the veterinary hospital, keep the cats apart for a few hours, then rub both cats with a common towel before their meeting.

Please do not wait to seek advice if you find yourself facing one of these all too common but heartbreaking scenarios. Early intervention increases the chance of a speedy recovery.