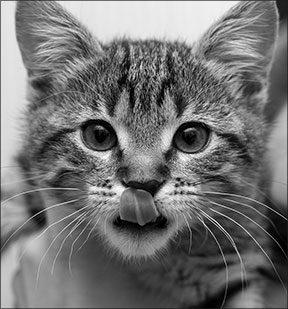 Do you know what message your cat sends when his tail stands upright? A survey of 1,100 owners in England found that 75 percent of them didn’t realize that an upright tail meant the moggy — their slang for cat — was sending a greeting.

Cat Protection, a charity organization with more than 250 volunteer-run branches in 29 adoption centers, questioned owners to determine their understanding of cat body language and also found that:

– One third failed to recognize that slow-blinking cats are contented. They may also turn their heads to the side to show trust and relaxation, the charity says.

– Thirty percent of owners believed a cat’s licking his lips indicates hunger. It can actually indicate stress, nausea, dry lips or the need to clean his face after a meal.

– One in three thought a cat lies on his back when he wants his tummy tickled. Not so, says Nicky Trevorrow, CABC, RVN, the charity’s behavior manager. Cats regard the rubbing as an abuse of trust they’re exhibiting and may scratch or bite. She says cats prefer to have their heads stroked.

– Forty percent didn’t realize flattened ears meant the cat is scared and wants to hide. Pulling a frightened cat from a hiding place to “comfort” him could increase his stress.

The charity has produced a three-minute video guide to cat body language after its study found that many owners struggle to understand their pet. The video is accessible at www.cats.org.uk/news/behaviour-survey.

Trevorrow acknowledges cats’ subtle facial expressions can be difficult to interpret. “Unlike dogs and humans, cats have not evolved the complex facial muscles that allow them to make obvious expressions,” she says.

“They are more subtle and can be difficult to read, so owners also need to look for non-facial signals that can indicate how their cat is feeling. Misreading signals can lead to you distressing your cat or being scratched, even if you have its best intentions at heart.”

Lack of Medical Care
A survey of 1,938 cat owners in the U.S. found that more than half of their cats — 52 percent — had not had a veterinary visit in 2012. The study by Bayer Health Care, working with the American Association of Feline Practitioners, uncovered a surprising reason for the lack of medical care beyond cats’ masking signs of illness and resisting veterinary visits:

Most respondents consider dogs as companions and cats as pets. “The vast majority — 81 percent — believed that cats are very self-sufficient and independent and therefore required little attention. Dogs, on the other hand, were viewed as much more dependent and needy,” according to the study. Sixty percent of respondents had cat-only households, while 40 percent had both cats and dogs. ❖