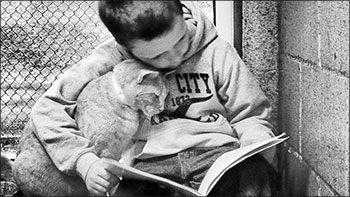 The placebo effect has been the subject of frequent research in human medicine, with results ranging from the psychological — you expect to feel better taking a medicine and you do — to the physiological — endorphins in the brain and spinal fluid caused your improvement.

Veterinary researchers, however, face the challenge of their subjects’ lack of speech. How do they weigh the placebo effect when studying a medication’s effectiveness? Owner observation can be wildly subjective. Is your cat lethargic after taking the medicine or simply napping on a sunny windowsill?

study at North Carolina State College of Veterinary Medicine, published in the Journal of Veterinary Internal Medicine, put science to work to investigate the caregiver placebo effect in a clinical trial of meloxicam, a nonsteroidal anti-inflammatory drug commonly used to relieve pain in cats with degenerative joint disease.

“Merely observing behavior can change it, and any changes in daily routine, like administering medication, will affect the way you relate to that animal and change its behavior,” says behaviorist Margaret Gruen, DVM, at North Carolina. Here’s how her team worked around that obstacle in a study of 58 client-owned cats:

They first gave owners a two-week placebo to accustom their cats to taking the medication and told them they were indeed giving a placebo.

They then gave half the owners a placebo and half the meloxicam for three weeks without either knowing it. All the owners said their cats improved. The reason: the caregiver placebo effect, Dr. Gruen says.

In the final three-week period, all owners gave their cats a placebo, unaware of it. Owners who had been giving the medication in the second phase said their cat’s signs of pain were returning. Owners of cats who had received placebo in the first phase saw no change.

Because owners in the final phase recognized pain returning in their dogs given the placebo, researchers determined the medication is effective in cats with degenerative joint disease, Dr. Gruen says, adding that the approach needs further investigation but may be useful in veterinary and human studies where the placebo effect is strong.

Book Buddies for Shelter Cats
Kristi Rodriguez, program coordinator at the Animal Rescue League of Berks County, brought her son, Sean, to the league’s shelter in Birdboro, Pa. The fifth-grader had been having difficulty reading at school, and she thought reading to the cats there might help him.

So began a program called Book Buddies for children in grades one to eight. They read to the cats in the adoption room, benefitting both the children and the animals. “Cats find the rhythmic sound of a voice very comforting and soothing,” the league says. And since the program officially began in August 2013, Sean has shown remarkable improvement in reading.

“Sean’s story is similar to those of many other children who have participated in Book Buddies,” the league says, adding that they include home-schooled children, Brownie Troops, autistic children and those whose parents want them exposed to animals.

Parent Katie Procyk says the program not only helped her son, it gave him a chance to help animals “who do not have warm, loving homes and [to understand] that we must help speak up for the critters who do not have a voice.”