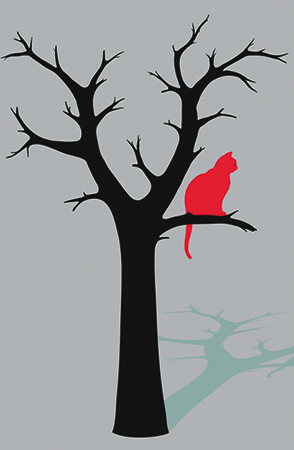 Smart Fundraiser—Feline-rescue volunteers offered nail trims for cats and kittens for a donation of $10 per cat in order to raise funds to care for shelter cats, according to Patch, Saint Paul, MN.

Who Ya Gonna Call?—The fire department, of course! When Jaquel Coquette realized Shadow was missing, she started combing the neighborhood, finding the meowing cat 15 to 20 feet up a tree with a pair of dogs in the yard below. Not knowing what else to do, Coquette called the fire department, who responded with a truck and ladders. Richfield City volunteer firefighter Colton Nay tried to grab Shadow, who wasn’t all that trusting. Eventually, Nay coaxed the cat out of the tree, says the Richfield Reaper, Richfield, UT.

Cat Hotel—At the Hotel Talisi, animal control reported the capture of T25 feral cats that were going into and out of the building, according to the Tallassee Tribune in Alexander City, AL. The hotel was already declared a public nuisance, but the cats—mostly homeless former housecats—add to the problem. They are also causing the city to treat areas for flea infestation.n