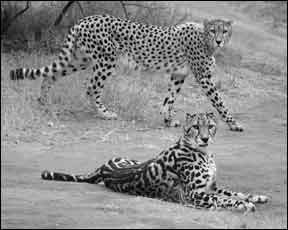 Researchers gathered DNA and tissue samples from feral cats in Northern California. They also studied skin biopsies and blood samples from captive and wild South African and Namibian cheetahs, and in a study believed to the first to identify a molecular basis of coat pattering in mammals, they made this discovery:

Tabby cats and rare king cheetahs share a gene responsible for the cats’ stripes and the cheetahs’ spots. However, when a mutation occurs, the tabby will develop patches of color rather than stripes, and the cheetah’s spots and blotches turn into wide stripes down its back.

“Mutation of a single gene causes stripes to become blotches, and spots to become stripes,” says Greg Barsh, MD, Ph.D., emeritus professor of genetics and pediatrics at Stanford University and an investigator at the HudsonAlpha Institute. “We were motivated by a basic question. How do periodic patterns like stripes and spots in mammals arise? What generates them? How are they maintained? What is their biological and evolutionary significance? It’s kind of surprising how little is known. Until now, there’s been no obvious biological explanation for cheetah spots or the stripes on tigers, zebras or even the ordinary house cat.”

In addition to the Stanford University School of Medicine, other participants in the study included the National Cancer Institute and HudsonAlpha Institute for Biotechnology in Huntsville, Ala.

Their research on the gene, known as Taqpep, was published in Science magazine. The study, made possible by the completion of the whole-genome sequence (the entirety of an organism’s hereditary information) of the domestic cat, has implications beyond coat patterns.

“The Laboratory of Genomic Diversity at the National Cancer Institute has long championed the cat as an animal model of human disease,” says Marilyn Menotti-Raymond, Ph.D., at the institute. “Studying color variation in cats provides the opportunity to uncover new principles of gene action and interaction that may have unexpected applications to understanding developmental and morphologic variation in natural populations, including humans.”

Mapping the Sphynx
Research is under way to identify the gene and its mutation that cause feline hypertrophic cardiomyopathy (FHC) in Sphynx cats. The disease, in which areas of heart muscle become thickened, is the most common heart disease in cats. It’s been established that Maine Coon and Ragdoll breeds can inherit the disorder.

A genome study has identified a chromosomal area as a “region of interest” in FHC. Kathryn Mears, DVM, Ph.D., DACVIM, at North Carolina State University of Veterinary Medicine, will evaluate the region in an effort to identify the gene and the mutation. “Ultimately, the identification of a genetic cause for HCM in the Sphynx can be used to reduce the prevalence of the disease in this breed and provide information … in many other cats as well,” says the Winn Feline Foundation, which is sponsoring the research, funded in part by Sphynx breeders and owners.