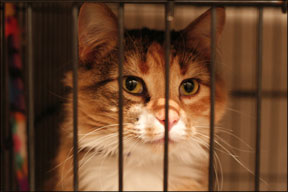 A study published in the Journal of American Veterinary Medical Association (“Characterization of animals with microchips entering animal shelters,” July 2009) determined that 7,704 microchipped animals entered 53 animal shelters between August 2007 and March 2008. Of this number, strays made up more than half (53 percent), with the remainder considered as owner-relinquished animals (41.9 percent) and other (5.1 percent).

The results showed that animal shelters were able to find the owners of three-fourths of stray dogs and cats with microchips. The sucess in finding owners was higher in dogs, animals that were purebred and animals that were spayed or neutered. Animal shelters had a much higher likelihood of finding an owner when the owner information was in the shelters own database or registered with a microchip registry. The results emphasize the importance of the registration process in successfully reuniting pets and owners.

The study demonstrated the importance of scanning animals more than once, and the need for proper technique. Veterinary clinic staff should scan microchipped animals during each wellness examination to ensure the microchip is functional and has not migrated. The study also indicated the importance of personnel at animal shelters to scan owner-relinquished animals and verify ownership via a microchip registry. The person relinquishing the animal may not be the rightful owner.

Feline panleukopenia, calicivirus and herpesvirus are all significant, common and highly contagious in susceptible feline populations. Cats are routinely vaccinated against these pathogens, but the time it takes following vaccination for protection to develop in the kitten has not been examined in depth. Induction of a rapid immune response is critical in high-risk environments such as shelters. A study in Veterinary Journal examined the level of protection in kittens one week after vaccination with a combination vaccine containing live strains of feline panleukopenia virus, herpesvirus, and Chlamydophila, and inactivated feline calicivirus, as well as recombinant FeLV component. A recombinant rabies vaccine was also given. Kittens were specific pathogen free, thus there was no maternal antibody to interfere with vaccine response. They were challenged one week (FPV, FHV, FCV), three weeks (FPV), or four weeks (FHV and FCV) after vaccination.

Kittens appeared to be protected from severe disease by one week post-vaccination, and virus shedding was also significantly reduced as compared to non-vaccinated kittens. No difference was noted whether kittens were challenged at one week or three to four weeks post vaccination. While a single vaccination with FPV induced rapid antibody production, two vaccinations with FCV and FHV were required for a similar response. While maternal antibodies will interfere with vaccinal response if present, this study shows that without maternal antibodies, vaccinal response occurs rapidly.

Veterinarians now recognize that preventive pain control is beneficial for cats undergoing surgery, providing comfort and faster recoveries. One of the most common feline surgeries is the ovariohysterectomy or spay. A study published in the Journal of Feline Medicine & Surgery investigated the efficacy of two drugs, tramadol and vedaprofen, in 40 female cats undergoing spay surgery. The cats were divided into four treatment groups: vedaprofen only, tramadol only, vedaprofen plus tramadol and placebo. Medications were administered one hour before surgery and for 72 hours after surgery. Pain scores were evaluated at regular intervals for the first 96 hours and then on day seven after surgery.

Cats with high pain scores were given rescue analgesia with morphine. Cats treated with vedaprofen and tramadol together did not require rescue analgesia and proved to be the most effective option evaluated. Multimodal analgesia is known to be a superior method of pain control and proved effective for cats undergoing spay surgery. The researchers recommended that pain control should be provided for a minimum of three days after spay surgery.