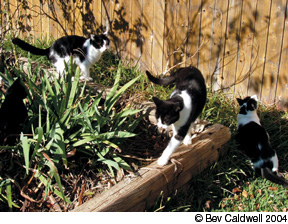 The Health of Feral Cats
One reason to keep pet cats indoors,  experts say, is to prevent our precious felines from mixing it up with disease-ridden strangers in the outside world. After all, many infectious diseases are spread by close contact and grooming (if cats are feeling sociable) or by fights and bites (if theyre not). A pet that comes home with a fight injury could get a nasty bacterial infection; most feline immunodeficiency virus (FIV), for example, is transmitted in bite wounds.

Researchers at the University of Floridas College of Veterinary Medicine knew all that when they examined 533 feral cats captured in a Gainesville trap-neuter-return (TNR) program, called Operation Catnip. Their report, published in the October 2004 Journal of Feline Medicine and Surgery, came as a surprise to some veterinary experts.

Before they were neutered and returned, the feral cats were tested for a variety of diseases that cats can give to one another, as well as maladies that cats – together with mosquitoes, fleas or ticks – have a role in spreading to humans and other animals. Cat-to-cat infections included FIV and FeLV (feline leukemia virus) plus feline coronavirus. Cats and the fleas that bite them help spread Mycoplasma haemofelis, Mycoplasma haemominutum and Bartonella henselae. Cats and ticks can be vectors for at least two organisms that infect human beings: Ehrlichia and Anaplasma phagocytophilum. Then theres Toxoplasma gondii, which exists in tiny, egg-like oocysts in the environment and can pass from cats to humans.

Before this list makes you swear off cats altogether, heres the punchline: Feral cats are no more likely to carry the diseases, according to the Florida study, than are wellcared-for pet cats.

Raining Cats and Dogs
Another article in the same journal (Feline high-rise syndrome: 119 cases) from Croatias University of Zagreb wont break any distance records for cats descending from skyscrapers. Few buildings in Zagreb that had a role in the collected cases exceed seven stories.

But the article does include an explanation of why, if a cat has a choice, it may survive a fall from a higher floor, and why accident-prone dogs should stick to the lower stories.

First, though, some falling-cat world records, as cited in the journal article: Cats have survived falls to hard surfaces from the 18th floor, into shrubbery from the 20th floor, and onto awnings from the 28th floor. At least one cat lived (with only mild chest injuries and a chipped tooth) after departing from the 32nd floor, although no one knows what softened the fortunate felines fall.

And how do cats go about falling? In phases, depending on how much time and distance they have on their side, according to the Croatian researchers. Early in a free fall, cats change position to try for a feet-first landing and a chance of no injuries if the drop is only a couple of stories. Then, once they attain maximum velocity (and theyre still falling), cats instinctively extend their limbs in a kind of parachute effect that increases drag. A parachute landing may spare them broken legs, while increasing the risk of chest injuries, the researchers said.

Those less-talented dogs cant do any of that. No dog is known to have survived a fall of more than six stories.