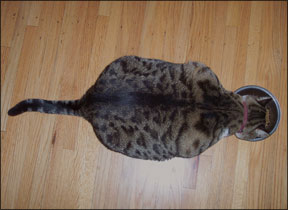 Veterinarians are following a study published in the

Journal of the American Veterinary Medical Association (Vol. 229, No. 6) as “Clinical evaluation of dietary modification for treatment of spontaneous chronic kidney disease in cats.”

The cats in the study, which was run by veterinary researchers at the University of Minnesota and the University of Tennessee, already had life-threatening chronic kidney disease. And the cats owners participated voluntarily in the two-year feeding study. Half of the sick cats got renal diets and half continued to eat so-called maintenance diets for adult cats.

At the end of two years, the researchers had this report: “The renal diet evaluated in this study was superior to an adult maintenance diet in minimizing uremic episodes and renal-related death in cats with spontaneous stage 2 or 3 chronic renal disease.”

The experiment also confirmed an earlier finding in an unrelated study: Regardless of whether cats with kidney disease eat maintenance diets or renal diets, reducing caloric intake helps their long-term health.

Why do dogs and people have more vision-blocking cataracts than cats do? Is there something special about the lenses in cats eyes?

British researchers set out to answer that question, and reported preliminary conclusions in the journal

Veterinary Ophthalmology (Vol. 9, No. 5), in an article titled “Prevalence of feline cataract: results of a cross-sectional study of 2,000 normal animals, 50 cats with diabetes and 100 cats following dehydration crises.” By “dehydration crises,” they meant bouts of chronic renal failure, diarrhea or vomiting that had required intravenous fluids in the previous 12 months.

Some study results surprised practically no one: Diabetic cats and cats that had suffered from dehydration crises were more likely to develop cataracts. But another finding was surprising to the researchers, if not to observant owners of older cats: “The prevalence of cataracts in the general feline population increases with age, and . . . by the age of 17 years all cats were affected with some degree of lens opacity.”

After staring into hundreds of cats eyes, the scientists admitted they had failed to solve the original puzzle: “What it is in the cat lens that delays the onset of age-related cataract.” Any additional information, they said, might help humans with aging eyes.

So far, however, cats are keeping that secret to themselves.

A recent issue of

Pet Services Journal recommends “five cat calmers” to look for in a boarding facility that will minimize trauma to its guests:A soundproof cat area where sensitive feline ears arent troubled by barking dogs.

Soothing music, such as mellow jazz or classical music.

No more than two different people caring for the guests, because “cats dont like change.”

An “environment of comfort” with fluffy towels, changed daily.