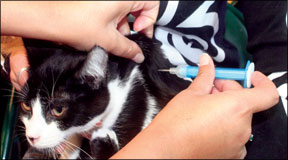 Here at ShortTakes office, we are on a healthcare honeymoon with Frannie, the feline “office manager” who is barely three years old. We are saving our worries (and money) for feline old age (the last ShortTakes muse, Gertie, lived to 21) when maladies like feline lower urinary tract disease (FLUTD) are likely to strike. Just in time

Cystitis is inflammation of the urinary bladder. Idiopathic means its cause is currently unknown. However, the stressors for cystitis have been identified. The report mentions “stressful events such as earthquakes, seasonal weather changes, moves to a new home, major holidays and diet changes.”

That settles it, Frannie. You cant move to California during the Santa Anna winds. Or Easter-Passover holidays, either.

The Joy of Home Cooking

Speaking of diet changes, heres a thought from the Journal of the American Veterinary Medical Association (Vol. 233, No. 11) and an article titled “Attitudes of pet owners toward pet foods and feeding management.”

People who make home-cooked (or raw) food for pets have “more concerns and misgivings about commercial pet food, food processing, and the pet food industry.” The study also cites “the enjoyment gained from preparing a food” for the pets at home.

Downstairs in the kitchen below the ShortTakes office, the enjoyment is not quite unanymous. Moose, the DogWatch ShortTakes pooch, is thrilled at the once monthly cooking of his dinners. The pot is stirred with lots of green, leafy kale plus ground turkey and beef, organ meats and a host of supplements prescribed by a veterinary nutritionist to boost his immune system and combat rheumatoid arthritis.

Frannie is not amused. What self-respecting cat would eat kale? Certainly not you, my dear. Nevertheless your home-cooking time will come, once we have another consult with the veterinary nutritionist.

The days of worrying whether the scanning wand from one kind of system would be able to read implanted ID microchips – see photo below of the simple process – in our pets may be on the way out. It has been an issue because American microchips come in several different frequencies and communication protocols. So, for instance, the chip in Frannies back (from the resQ pet tracking system) has always been best read with a scanner from that company.

Our newfound hope is due to the promise that so-called universal scanners are improving, according to a report in JAVMA (Vol. 233 Issue 11): “Results indicated that some currently available universal scanners have high sensitivity to microchips of the frequencies commonly used in the United States, although none of the scanners had 100 percent sensitivity.”