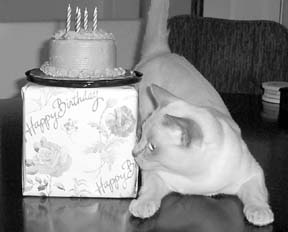 Predicting Feline Birthdays
Obstetricians are pretty good at predicting when human babies will be born. Now veterinarians have a technique to come even closer for pregnant cats.

Reporting on Use of fetal skeletal mineralization for prediction of parturition date in cats in the Journal of the American Veterinary Medical Association (JAVMA Vol. 223, No. 11), University of Florida researchers say they can tell almost exactly when – plus or minus a day – feline fathers should hand out cigars.

Two problems make parturition prediction difficult in cats: Feline estrus lasts anywhere from one to 21 days, so even when cat owners watch carefully its impossible to tell which of many copulations has triggered the surge of luteinizing hormone that leads to ovulation and conception. And even if the owner somehow knew the date of conception and marked the calendar, feline gestation typically lasts 56 to 71 days.

The Florida researchers used computed radiography to X-ray fetuses in 31 pregnant cats, looking for the first appearance of mineralization in skeletal structures. Skulls, vertebral columns and ribs usually are the first to become bony enough to show up on radiographs, they already knew, while baby teeth are the last – becoming mineralized as little as three days before birth.

They discovered that two kinds of fetal bones – the humerus in the front legs and the femur in the hind legs – are the best predictors of parturition. Twenty-one days after first mineralization of the femur and 20 days after the humerus is clearly visible on X-rays, the kittens probably will be born.

Declawing Not First Choice
Cat owners may start following a new recommendation by the American Animal Hospital Association (AAHA) and avoid declawing their pets. In a position statement issued at the end of 2003, AAHA said: Declawing of domestic cats should be considered only after attempts have been made to prevent the cat from using its claws destructively or when clawing presents a significant health risk for people within the household.

Onychectomy is the technical name for the surgical procedure to remove what, for cats, is the equivalent of human fingertips up to the first knuckle. If declawing is deemed absolutely necessary, AAHA has three more recommendations: Only claws on the front feet should be removed, pain medication should be given during and after the operation, and the clawless cat should be housed indoors for the rest of its life.

The full text of the AAHA statement – including details on alternatives to declawing, such as building suitable implements for normal scratching behavior and trimming claws every one or two weeks – can be found at the associations web site http://www.aahanet.org/.

Why Cats Want Remote Controls
AAHAs latest Pet Owner Survey found two-thirds of pet owners in the United States feeling guilty when they leave cats or dogs at home alone. To ease their guilt, 47 percent turn on a radio or television before closing the door.