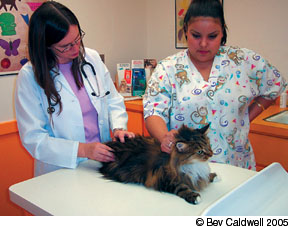 Oh, My Achin Back!
Dogs have a reputation for back problems – maybe because they whine so much. But the more stoic cats could be suffering from diseases of the spinal cord, too, according to a report in the Journal of Veterinary Internal Medicine (Vol. 18, Issue 6).

Veterinary researchers at the University of Pennsylvania and University of Tennessee checked the medical records of 205 cats with spinal cord disease. Overall, the cats had a variety of diseases – most notably inflammatory or infectious diseases – and topping the list of spine-related ailments was feline infectious peritonitis (FIP). Next on the list were neoplastic (or cancer-related) conditions, particularly lymphosarcoma and vertebral column neoplasia.

There were fewer traumatic causes of feline spinal cord disease from injuries and even fewer inherited causes. The age of the kitty had much to do with the kind of disease, though. Cats younger than two years of age were more likely to have FIP. Lymphosarcoma and vertebral column neoplasia were more common in cats between two and eight years of age, and vertebral column neoplasia alone was more common in cats over eight years old. Interesting, though, is that one common cause of back pain in humans, degenerative disease, is almost unheard of in cats.

Radioiodine Therapy Called Best for Hyperthyroidism
An analysis in the journal Veterinary Medicine (Vol. 99, Issue 11) examined various treatments for hyperthyroidism, when a cats thyroid glands produce too much of the hormones triiodothyronine and thyroixine. The study looked at surgery, medical treatments (including methimazole in a transdermal patch), and some so-called novel treatment options (ethanol ablation, with alcohol injected into the glands for six weeks, and heat ablation of the thyroid glands with high-powered ultrasound waves).

Therapy with a radioactive isotope of iodine was rated safest and most effective in the journal report. Radioiodine therapy, once the course of treatment is completed, can take several months to reduce hormone levels, the journal advised. And although it may seem more costly than other treatments, at least at the outset, the journal tells veterinarians: Advise owners that long-term medical treatment or surgery costs are similar to radioiodine therapy costs.

A separate article in the same journal examined possible causes of feline hyperthyroidism and eliminated several possible culprits: exposure to fertilizers and herbicides, regular use of flea products and having a smoker in the house. But the jury is still out on heavy doses of fish, liver and giblets flavors of canned cat food, which the journal said, may have a significantly increased risk of hyperthyroidism.

No Kalanchoe for Kitty
Add another item to the list of plants that cats shouldnt eat. Many of the nearly 200 species of the popular flowering plant, kalanchoe, are toxic and potentially lethal, according to an article in the journal Veterinary Medicine (Vol. 99, Issue 11). Researchers at North Carolina State and the University of Illinois explained how kalanchoe chemicals called bufadienolides are similar to digitalis, and how they affect the sodium-potassium pumps in heart cell membranes. The result is clear: A progressive decrease in electrical conductivity through the heart, resulting in irregular heart activity and, eventually, termination of heart activity, according to the article.

Names of some of the toxic kalanchoe will be familiar to plant collectors. Theres the devils backbone, also known as mother of millions and the Mexican hat plant. Not to mention palm beachbells, a.k.a. donkey ears, and feltbush, a.k.a. velvetleaf. But the common name for Kalanchoe blossfeldiana hints at its lethality. The so-called florists kalanchoe is also known as Madagascar widows thrill.