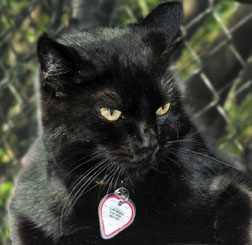 Why We Prefer Cats: Reason #1
An article in the journal Veterinary Research Communications, titled Nutritional Peculiarities and Diet Palatability in the Cat, brings up a key difference between feline and canine tastes for treats. According to veterinary researchers from the University of Bologna in Italy, Cats also reject the monophosphate nucleotides that accumulate in mammalian tissues after death, and this may be partly responsible for the cats dislike of carrion.

Okay, Rex, you can drag Mono the Squirrel back where you found his moldering corpse, thank you very much.

Reason #2: Cats Know When to Hide
A session on animal behavior problems at the recent North American Veterinary Conference focused on too-often-overlooked early signs of stress in cats. Left untreated, the stresses can escalate to feline misbehavior, according to Karen Overall, VMD, PhD.

She explained that hiding is a cats natural coping mechanism for stress, a sign that cat owners and veterinarians alike frequently overlook. History shows that hiding may be a cats best way to avoid danger and lessen stress, Dr. Overall said, noting that when cats cant hide, their immune systems ability to fight infection diminishes.

To illustrate cats natural instinct to hide, she then told the story of the 1995 Great Hanshin Earthquake in Kyoto, Japan. First responders to the earthquake assumed most of the citys cats were dead – because they couldnt find them, Dr. Overall recalled. But in the aftermath of the disaster, Kyotos cats reemerged and were routinely reunited with their owners. Dogs that survived the earthquake in the open, on the other hand, continued to suffer severe panic reactions long after the damage to buildings had been repaired.

Listing other signs of stress (decreased grooming, loss of sleep and anorexia), Dr. Overall urged cat owners to videotape possible signs of misbehavior and then show the videotape to a veterinarian or behavior specialist.

Tough Love in North Dakota
When we learned the fate of William T. Dennis, the 38-year-old Bismarck, North Dakota cat owner who went to jail because his kitty lacked a proper license, CatWatch Short Takes had to check the letter of the law. Whats with a place, anyway, where the deer and the antelope roam – but cats cant?

Turns out the cat licensing law in the capital of North Dakota (and home of the state penitentiary) is pretty specific: It is unlawful for any person within the City of Bismarck to keep, maintain or have in custody any dog or cat over the age of six months which is not licensed and/or inoculated against rabies.

Cat licenses, which are issued by veterinarians in Bismarck, cost $6 a year if the pets are spayed or neutered, and $18 per annum if theyre not. While those fees might seem burdensome, keep in mind that Bismarck law limits each household to a total of three cats.

Actually, Mr. Dennis got off easy with 48 hours in the slammer. He could have been sentenced to a year in jail and fined $1,000. Still, we were skeptical until we reached the bottom line of Bismarcks pet ordinance:  Remember the three Ls, it says. License, Leash and Love your pet(s).