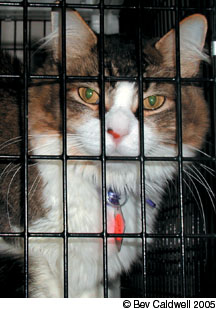 Stem Cell Study Hopes to Benefit Endangered Cats
A study underway at Cornells College of Veterinary Medicine addresses a problem in wildlife conservation: Too many males of endangered species – the snow leopard and Spanish lynx, for instance – cant make viable sperm. More tragically, many endangered cats perish before reaching reproductive age when they could produce sperm to keep their lines alive.

The Cornell researchers are foster-parenting a kind of stem cell, called spermatogonia, that will differentiate and grow up to become cat sperm if its kept long enough. Scientists do this by taking a snippet of testicular tissue from young, male cats – housecats, at first, before trying the experiment with the wild kind – and transplanting the tissue under the skin of mice.

The tissue keeps growing on the side of the mouse, forms a cat testicle, and eventually the spermatogonial stem cells mature to become sperm. Then researchers harvest the sperm for captive-breeding programs that, they hope, will ultimately increase endangered-species populations.

Adoptable Cats Nervous in the AM
Talk about stressful situations: There you are, one in 100 cats at a big city animal shelter, constantly trying to catch the eye of prospective adopters as they browse for a pet. Youre stuck down there at ankle level in the bottom tier of a floor-to-ceiling stack of cages – for weeks on end – and you havent seen daylight since you cant remember when, though youve seen and heard enough yapping dogs across the hall, also hoping to be adopted.

In the door trots an able team of veterinary researchers from Tufts University, the Animal Rescue League of Boston and the Massachusetts SPCA, aiming to do an Assessment of stress levels among cats in four animal shelters. Theyll publish their findings in the Journal of the American Veterinary Medical Association (Vol. 226, No. 4).

Just the thought of giving blood for yet another test is enough to elevate your feline stress level. Luckily for you, they evaluate stress with a urine test for cortisol-to-creatinine ratios – and theyll simply sift through your litter to get the urine they need.

Not so luckily, your stress levels will be compared with those of cats in those new enriched-environment shelters in the suburbs. You know those places – all the cages are at viewing level. Theres lots of natural light. Fewer cats. And the dogs cant even be heard because theyre housed far away in the shelter.

Results of the stress tests in traditional and enriched-environment shelters bode well for cats with patience. As expected, all cats were more stressed first thing in the morning. Who wouldnt be, facing another day in the interminable adoption process? To the gratification of officials at the enriched shelters, cats housed there had generally lower stress levels.

The surprise to researchers was what didnt differ, in either kind of shelter: Cats that had been waiting a long time for adoption were no more stressed than the newcomers to the shelters.

And with that positive news, dear kitty, try to keep looking your best. Here come a couple of nice people, looking for a mature, experienced cat to adopt. This just may be your lucky day.