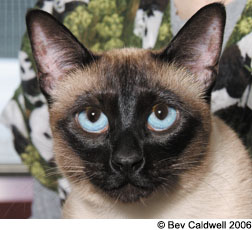 Veterinary researchers now know which six breeds of cats are more likely to get feline infectious peritonitis (FIP), the relatively rare but invariably fatal disease that begins with an enteric coronavirus infection in the upper respiratory tract and spreads throughout the body.

Writing in the Journal of Feline Medicine and Surgery (Vol. 8, No. 1), scientists at North Carolina States College of Veterinary Medicine report on a 16-year study of mixed-breed and pedigreed cats seen at the colleges veterinary teaching hospital. The pure breeds found to have a higher incidence of FIP, compared to mixed breeds, included Abyssinian, Bengal, Birman, Himalayan, ragdoll, and the Cornish and Devon varieties of rex. They said the prevalence of FIP in Burmese, exotic shorthair, Manx, Persian, Russian blue and Siamese cats was not significantly different than in mixed-breed cats.

For years veterinarians have noticed that FIP is more common in pedigreed cats in general. But the North Carolina study listed 23 breeds with zero prevalence of FIP – at least in their hospitals experience over 16 years. So they looked at other known risk factors for FIP. And still they found no explanation for the unlucky six breeds.

Age of onset (three months to three years) could not be a factor, since all cats are young once. And while the stressful life in catteries – where viruses can spread from newly introduced cats – does place pedigreed cats at greater risk than mixed breeds in single-cat households, this doesnt explain why kittens of most pure breeds still leave catteries without FIP.

The best the researchers could do was to offer two partial explanations. Maybe the six breeds have reached the same evolutionary bottleneck as wild cheetahs, which have a very high prevalence of FIP  – a concentration of inherited factors through in-breeding or small founder populations.  Or maybe 22 breeds share the luck of Maine coons, which are frequent and FIP-free patients of the North Carolina hospital – and have some unrecognized protective factors that influence susceptibility.

FeLV and FIV May Be Decreasing

Sorry for the alphabet soup, but this time the news about feline leukemia virus (FeLV) and feline immunodeficiency virus (FIV) is better. Sort of.

Reporting in the Journal of the American Veterinary Medical Association (Vol. 228, No. 3), veterinary researchers at the University of Florida in Gainesville and at Texas A&M in College Station say that their most recent study found these rates in cats: 2.3 percent were seropositive for the FeLV antigen, 2.5 percent were seropositive for the FIV antibody, and 0.3 percent of cats seemed to be infected with both viruses.

Compare that to a large national study 10 years ago that found 13 percent of sick or at-risk cats to be infected with FeLV and seven percent with FIV. Yet a 1998 study found much lower prevalence in otherwise healthy cats: 1.3 percent were positive for FeLV and 0.9 percent for FIV. And a study of 1,876 ownerless feral cats reported prevalences of four percent for each virus.

After slicing and dicing the data a hundred different ways, the researchers had this advice: Because cats in all categories are still at risk, owners and veterinarians should follow current guidelines to test all cats at the time of acquisition and again during illness . . . whenever possible.