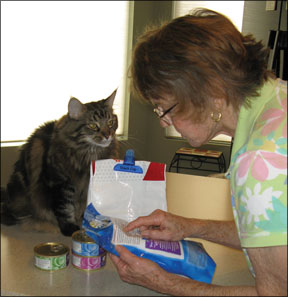 Canaries and cats have another thing in common – besides an aversion or appetite, respectively, for one another. Like the legendary canaries in the coalmines, cats can be “Sentinels for Public Health,” the title of an article in Veterinary Clinics of North America (Vol. 39, Issue 2).

The journal says “companion animals have an especially valuable

role as sentinels because of their unique place in peoples lives, with exposure to similar household and recreational risk factors as those for the people who own them.”

For example, cats suffering plumbism (lead poisoning) “have led to the discovery and successful treatment of lead toxicity in children living in the same household,” according to the journal. When chemicals leaked from a Georgia plant in 2006, public-health workers went door to door, asking if cats and dogs were suffering respiratory effects. And of course, cats and dogs were the first to be affected in 2007 by melamine-contaminated wheat gluten from China. The subsequent investigation stopped chicken and pork that had been fed contaminated gluten from reaching the human food supply.

Surprisingly, cats are yielding to dogs as sentinels for cat scratch disease (CSD, caused by Bartonella hensalae) according to the journal: “Due to similarities between clinical signs in canine and human bartonella infection, the canine species may be a good sentinel species for CSD and other potential bartonella infections of humans.”

Why You Should Read the Labels

An article in the Journal of the American Veterinary Medical Association (Vol. 234, No. 5) tells us why its so hard to find the right probiotics, which are defined as “live microorganisms which when administered in adequate amounts confer a health benefit on the host.” Chronic renal disease and inflammatory bowel disease, among other conditions, can be treated with probiotic in food.

However, probiotic microorganisms in commercial pet foods need to be alive and “viable” (capable of being cultured and reproduced in the laboratory) to be effective, the journal reports. Few of the commercial pet diets actually included all (or even any) of the probiotic “bugs” they claimed on the labels. Many had only “probiotic fermentation products,” which are not necessarily viable.

When researchers checked probiotic supplements, which can be added to pets food, they found misidentifications, misrepresentations, misspellings – and in one product line, mold.

Web Pick of the Month

“Epidemiology of Rabies in Skunks” in the same issue of JAVMA (Vol. 234, No. 5) had us thinking how that zoonotic disease can pass from suburban wildlife to cats and dogs and to people – and why cats, too, should be vaccinated against rabies – when a headline at a veterinary web site (www.aahanet.org) caught our eye: “Men contracted rabies after eating cat, dog.”

But the vet site wouldnt let us read more without a password. Further googling, however, led to a very accessible blog that is the ShortTakes Web Pick of the Month, although it has a yucky name: www.wormsandgermsblog.com.

Canadian experts at the Ontario Centre for Public Health and Zoonoses and the City of Hamilton Health Department write the blog (click on the “Cats” category to get started). If you visit Worms & Germs Blog (not while eating dinner, please) youll get the rest of the rabies/cat/dog/men story. (Hint: Rabies has not suddenly become a food borne disease.)