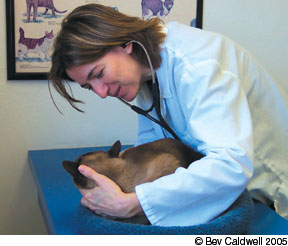 Misbehaving Seniors
Just as human Baby Boomers are about to swell the senior-citizen ranks, a Kitty Boom has more families sharing their homes with lots of geriatric – but generally healthy – cats of retirement age.

In the cat-happy times between 1983 and 1996, the percentage of cats six years of age and older nearly doubled to 47 percent of the feline-American population. All those cats that were only six in 96 are 15 today. And they have lots of company.

A report by the Panel on Feline Senior Care, appointed by the American Association of Feline Practitioners and the Academy of Feline Medicine, offers cat-care guidelines for veterinarians in keeping with this philosophy: Old age is not a disease in and of itself.

While not binding on veterinarians, the guidelines – authored by CatWatchs own Dr. James Richards and eight other panel members – might be expected to influence how feline medicine is practiced. (Some recommendations for routine care are reported in the next item.) What the panel has to say about behavior changes in feline senior citizens should help cat owners cope with companions that arent always their lovable old selves.

As expected, veterinarians are advised to check each patient for medical conditions that can trigger behavior change before pronouncing a diagnosis of cognitive dysfunction. Or, as we say of Short Takes Kitty Boomer Emeritus, 18-year-old Gertie: She hasnt lost all her marbles; she just forgot where she left them. Thats why she wanders around meowing to herself.

Indeed, increased vocalization is one of 10 behavior changes that in absence of any physical causes add up to cognitive dysfunction, according to the guidelines. Some of the others are confusion, disorientation, decreased interaction with the owner and increased irritability.

Two more senility signs seem to go together: problems performing previously learned behaviors and alterations in sleep cycles. In other words, hearing the humans say,  Were going to bed now, Fluffy, and so should you! may not influence the wee-hours behavior of dear old Fluffy the way it used to.
However, the panel notes that no drugs are currently licensed in North America  for treatment of cognitive dysfunction in cats. They label drugs that help improve cerebral blood flow and normalize levels of neurotransmitters (such as dopamine and serotonin) as holding some promise.

Semi-Annual Well-Cat Exams Advised for Seniors
Starting sometime between the ages of seven and 11, even cats with no apparent signs of illness should be examined and evaluated by a veterinarian at least twice a year, recommends the Panel on Feline Senior Care.

Once a year, a senior cat should have several kinds of diagnostic tests, including a complete blood count as well as screens for kidney disease, liver disease and thyroid function. Older cats at risk of exposure should continue to be tested for feline leukemia virus and feline immunodeficiency virus. The panel is divided on whether or not older, well cats need annual blood-pressure tests.

When you see the bill for all those tests, remember this advice from the panel: The quality of an older cats life can often be significantly improved by appropriate and timely medical intervention.

The 27-page report was published in the Journal of Feline Medicine and Surgery (Vol. 7, Issue 1).