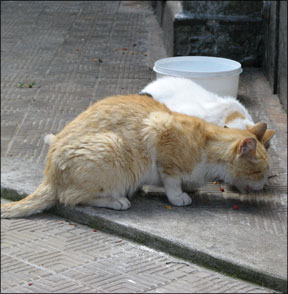 Despite protests by the Cat Fanciers Association (and the American Kennel Club), Los Angeles has enacted one of the strictest pet-sterilization laws in the country. Unless youre a registered breeder, failure to spay or neuter a cat after four months of age in L.A. can bring a $500 fine or 40 hours of community service.

Advocates of the tough new law say they had no choice. Los Angeles animal shelters had to euthanize 8,960 unwanted cats last year.

As the 2008 presidential race grinds on, political pollsters are asking some awfully odd questions.

Its almost a relief to be polled by veterinary researchers asking about “Attitudes toward and perceptions of free-roaming cats,” the title of one report in the

Journal of the American Veterinary Medical Association (JAVMA Vol. 232, No. 8).

On the controversial issue of feeding free-roaming cats, pollsters were surprised to find 26.2 percent of Ohio residents admitting to that act of kindness. In Floridas Alachua County, 12 percent of the folks there set out food for strays. In San Diego County, California, that number is nine percent, whereas only eight percent of people in Massachusetts feed strays.

We dont expect Republicans or Democrats to take a stand on this issue. But having housed cats in two key states (Texas and New York), we know that cat food on the back porch attracts possums.

AVMA Vol. 232, No. 8) reported on infections of feline leukemia virus (FeLV) and feline immunodeficiency virus (FIV) among cats with bite wounds or abscesses that probably resulted from fights with other cats. Both diseases, the researchers noted, are transmitted in the saliva of infected cats.

Their conclusion makes us more determined than ever to keep Frannie, the ShortTakes office feline, properly vaccinated and safely indoors: “Fighting and biting behavior of cats living outdoors is the primary mode of transmission.”

The Rising Cost of Cat Food

Along with Frannie, were always amused by statistics on the cost of cat ownership. Whether they measure the average annual cost of veterinary care for a cat in the United States, the amount spent on cat toys and treats or, as they did most recently, the average cost of cat food for a year – they always make us feel like big spenders.

So when the Pet Food Institutes Kurt Gallagher addressed the fast-rising price of grains, such as rice – and said that pet food prices were relatively stable because meat and meat byproducts arent going up as fast as grains – we felt a little better. Then the industry spokesman gave the cost of feeding a cat for a year – $57 for the average American feline (compared to $128 for the typical dog).

Hand over that napkin, Frannie, while we run some numbers. Two cans of your favorite fishy stuff, at $1.25 plus tax per can, makes you breakfast for a week. Add another dollar a week for that crunchy-dry dinner and – lets just say youre well above average.

But whats in that pricey dry food – the one with kelp, cranberries and apples in the middle of the list? Hey, the number-three ingredient is brown rice! How about some nice brown

mice, Frannie, and its your turn to fix dinner.