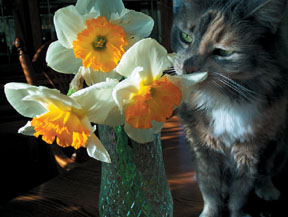 Tiptoe Through the Daffodils

A surprising report in a recent Canadian Veterinary Journal (Vol. 35, Issue 3) documents a rare case of daffodil poisoning in cats. Rare because those cheery yellow flowers more often poison dogs – which probably dont know better than to eat daffodil bulbs – and people, who should know better than to mistake the flower bulbs for onions or leeks.

This Ontario cat had changed the recipe and nibbled dried daffodil stems – no one knows how or why – but the toxicity of stems didnt surprise researchers. The so-called daffodil pickers rash afflicts commercial flower growers and florist shop workers, in part because of the calcium oxalate crystals in daffodil stems.

Researchers didnt say whether the cat learned a lesson, upon its recovery, although the treatment must have seemed worse than the illness. Besides medicines, the cat was treated with warm baths, heat lamps and hair dryers to help raise its body temperature.

Thinking Outside the (Litter) Box
The leading behavioral complaint among cat owners, as animal-behavior specialists described feline elimination problems in a recent Journal of Feline Medicine and Surgery article (Vol. 6 No.1, 2004), has veterinarians scratching for better remedies.

Some of the new ideas to eliminate elimination problems may sound far-fetched, researchers concede, but they might be worth trying. For example, a little chemical deceit could stop a cat from marking its territory by urine-spraying – on walls, furniture, anyplace but the litter box. A product called Feliway, which is said to contain a synthetic form of cats facial pheromones, could be applied to the spot where the cat sprays, on the assumption that cats will not urine mark where they have previously performed facial marking, researchers suggested.

And suppose you dont know which of your charming cats is demonstrating bad toilet manners? The Urinator can be detected by giving cats – one at a time – a swallow of medical dye, in the form of fluorescein, then shining a fluorescent black light on the latest puddle: If it glows brightly (all urine will fluoresce slightly in black light) youve caught the culprit.

Of course, none of these tricks should be tried at home without the advice of a veterinarian. And that goes for the researchers prescribed scheme to see which cat has defecated: Mix crayon shavings into each cats food – say, Jazzberry Jam for Fluffy and something like Mango Tango for Burt – then examine the out-of-place feces for color.

And dont worry about cats and crayon shavings. Their safety was tested first on humans, whose children have been gnawing on Crayolas for more than 100 years.

It Takes a Village
The same issue of Canadian Veterinary Journal, in the article Social organization in the cat, tells why kittens with several extended-family moms – instead of just one or none at all – are the wiser for their communal upbringing.

Other female cats apparently dont even have to be related; they instinctively pitch in and help raise kittens. The cooperative behavior might go back thousands of years, when people were learning to farm and cats learned to cooperate and defend food resources, researchers noted, adding: Kittens from communal nests also leave the nest about 10 days earlier than kittens from nests with single mothers.