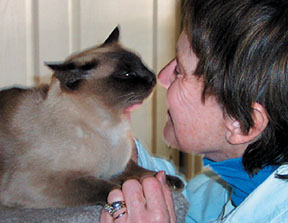 Another Use for Facial Pheromone
Veterinary researchers in Scotland have found another use for synthetic feline facial pheromone (FFP) – although theyre still not entirely sure how it works.

FFP comes in spray canisters to spritz on a chair leg or other places where cats might rub their faces – to leave behind traces of their natural facial pheromone. The chemically identical version of the feel-good pheromone seems to reduce anxiety-related behaviors such as spraying or urinating outside the litter box. The researchers, whose report in the Journal of Feline Medicine and Surgery (Vol. 6, Issue 3) concerned another problem altogether – feline idiopathic cystitis – found by chance that applying FFP to cat carriers before a long car journey reduced crying, agitation, salivation and vomiting.

Between 55 and 69 percent of cases of feline lower urinary tract disease (FLUTD) are idiopathic, meaning that they stem from unknown causes. The signs of cystitis, however, are clear enough: increased frequency of urination, straining and crying out while trying to urinate, urination outside the litter box and blood in the urine.

In the latest study, owners of cats with persistent cystitis were told to spray FFP in all rooms where the cats spent time, and the treatment helped in about 55 percent of cases. But why and how?

We think the experts simply dont know for sure. The researchers talk about some cats ability to cope with stress, and about what happens to the hypothalmic-pituitary-adrenal axis when cats cant cope. The application of FFP may help to reduce some cats overall sense of anxiety, they said, and that may in turn reduce the severity of signs associated with their feline idiopathic cystitis.

Dont Worry, Have Kitty
Living with a cat obviously cant guarantee perpetual happiness. But when it comes to avoiding bad moods, a feline friend around the house can be just as helpful as a spouse or other human companion.

That is one conclusion from a survey, reported as Spouses and cats and their effects on human mood in Anthrozoos, the multidisciplinary journal of the interactions of people and animals (Vol. 16, No. 3).

Researchers from Northwestern University in Illinois and from the Institute for Applied Ethology and Animal Psychology in Switzerland asked hundreds of people in and around Zurich to report on their mood states at nine oclock at night.  Participants could choose the day of the week to document – in case anyone was having a bad hairball day – but for consistency their observations had to be made at 9 p.m.

Those surveyed were people with a human partner and one or more cats, couples without cats, people with cats but no human companion and single people with no cat.

Its now nine oclock. Do you know where your cat is? Do you care where your partner is? We didnt think so.